On the face of it, filmmaker Agnès Varda and artist JR make an improbable team. Varda is an 89-year-old female director who initiated the epochal French New Wave in the mid-1950s. JR is a 34-year-old street artist and photographer who, like Banksy, chooses to conceal his identity. She’s earnest, sagacious and plods through the French countryside. He’s acerbic, youthful and rushes through French villages and plains. Although, there’s far more that unites them. Both believe that art has the capacity to challenge and change society. Most importantly, Varda and JR are a compassionate, empathetic duo that exude a rare humanity.

Their documentary, Faces Places, provides the occasion for these two artists to join forces on the screen. After an amusing, bouncy introduction where Varda and JR almost meet at bus stops, coffee shops and metropolitan streets, they come together to decide what project they’ll collaborate on. They agree to travel across rural and suburban France in JR’s van, which is fitted with a photo booth and a large-scale printer. The van not only allows them to journey through the country, but it also enables them to carry out the project; for it consists of taking immense black-and-white images of people to paste onto buildings and houses. The project seems more linked to JR’s artistic practice, but that doesn’t bother Varda. “JR is fulfilling my greatest desire,” she intones, “to meet new faces and photograph them so they don’t fall through the holes in my memory.” Then again, the project is captured through the cinema. Thus, the interwoven nature of the cinematic and photographic works fuses the creative talents of Varda and JR in a complex and captivating way. 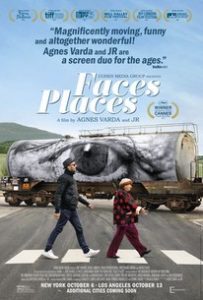 Varda and JR are taken to various locales; old mining towns and farms, industrial sites and dockyards, towns and stony beaches. They meet and converse with postmen, waitresses, the wives of stevedores, and farmers – people seldom seen on the screen, people routinely deemed by mass culture as common and uninteresting. On this level, Faces Places tells and reveals stories and lives that are typically obscured. And, it turns out that they’re well and truly deserving of the attention. In a particularly memorable scene, we see the three wives sitting in empty shipping containers, piled atop quite a few others. Pasted on the containers next to them are enormous images of themselves. One of them confidently announces in a voice-over, “I feel strong.”

The film also sits on another plane. It seeks to explore Varda’s legacy, memories and experiences. She’s enjoyed a career that has spanned over six decades, and in that time brought great art to the world. She’s made seminal films such as Cléo from 5 to 7 and La Pointe Courte, and taken breathtaking and intimate photographs of human and animal subjects. In her old age, unfortunately, her vision has given out. Images that were once so crisp have become blurred. However, she still recognises beach boxes where she took photographs of friends many years before. The film poetically asks us interlinked questions about the permanency of images and existence, the differences between the material and the immaterial, and the passage of time.

Despite the arthouse aesthetic and the abstract nature of some of its themes, Faces Places has a mainstream appeal that many documentaries of the same ilk wouldn’t. Varda and JR take us to beautiful landscapes, and their friendly bickering keeps proceedings running at a lively pace. And while Varda and JR’s relationship takes precedence, the film is a marriage of all of its subjects – the old and the young, artists and blue-collar workers, friends and strangers. Faces Places is a much-needed example of harmony in fractured socio-political times.

Faces Places is showing from 25 January through Madman Films.

Written By
Nick Bugeja
More from Nick Bugeja
The biopic film has been around for many years. Its first appearance...
Read More