Stephan Elliot has essentially mastered his own unique sub-genre here in Australia. With outrageous comedies like Priscilla that have their own slice of humour and delight in excess, Swinging Safari is more of Elliot’s trademark bombastic filmmaking.

First and foremost the star of Swinging Safari is Australia in the 1970s. That strange time when Whitlam changed the country forever, a time before CDs, mental illness and political correctness. When hair was big, music was mellow and you could still smoke on airplanes. Guiding us through this mammoth cringe-inducing gallery are three families living on a sleepy Gold Coast town that are obviously based on Elliot’s experience growing up and brought to life by the A-list of local talent. Elliot’s alter ego is 14 year-old Jeff (Atticus Robb), an aspiring filmmaker trying to keep his sanity in check while dealing with the flat out bonkers time he’s living.

Coming-of-Age films live or die on the charisma of their lead. One of the problems that Safari starts with is that Jeff and his romantic interest Melly (Darcey Wilson) simply aren’t that interesting. Elliot tries to give equal time to the stories of both children and their parents, which works in theory but doesn’t execute properly because the pair of youths we have to connect with simply aren’t compelling. 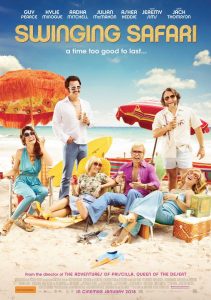 The parent’s story is where Elliot finds fertile ground for comedy. Asher Keddie, Julian McMahon and Guy Pierce are always good, especially here where they’re back home in their own accents. The large cast which also features Kylie Minogue is given an added layer of authenticity considering most of these actors were children of the 1970s.

A question that hangs over proceedings is if we the viewers should judge what we’re seeing through modern eyes or try to shrug it off as the morals of the 1970s. This was a time when the sexual revolution was mixing itself with a cocktail of new and illicit drugs, and some of the things that happen are played for laughs when in the landscape of 2017 they come off best as in poor taste and worst a bit creepy. Elliot has always been one for thumbing his nose at tameness and diving into a bit of rowdy fun yet some of the plot developments that involve one of the daughters doesn’t sit that well. It’s meant to be outrageous and raunchy but this doesn’t mean it shouldn’t be scrutinised.

Swinging Safari is, if nothing else, a wild ride through the strange days of what is now Gen X nostalgia. Anyone who grew up in 1970s Australia will have a spectacular time with this simply for all the props, costumes and phenomenally poor facial hair is brings back to life. Elliot might not have much of an eye for character and the film doesn’t ever know the meaning of the word ‘subtle’ but for what it tries to be it’s an energetic trip.

Swinging Safari is out in Australia cinemas through Becker Film Group.