Before you ask, yes, he says it.

Well, not the whole thing. But he does comes close.

“I will kill you,” Liam Neeson declares over the phone during The Commuter, while his family are being held captive, no less. And if you listen carefully, he spits out the word “taken” a few scenes later.

These lines are inconsequential to the story, but are relevant because the sole appeal of Jaume Collet-Serra’s The Commuter is to watch Liam Neeson do what Liam Neeson does best – beat the crap out of unsuspecting people, take control of messy situations, and argue with bad guys over the phone.

All of this makes The Commuter a fun 105 minute ride, captivating the audience from start to finish with fast-paced action sequences, a mystery-filled plot and a new twist on the whodunit trope. It continues a long tradition of train-based action films, a setting made famous by Alfred Hitchcock through classics such as The Lady Vanishes and Strangers on a Train. In this iteration, Neeson’s Michael MacCauley is at the centre of it all, a life insurance salesman whose day starts with a surprise sacking and only gets worse when he boards a New York train. Here, he is greeted by the unfamiliar Joanna (Vera Farmiga), who asks him to track down a passenger named “Prin”.

Up until this point, the film isn’t half bad. The opening sequence offers a creative way of delivering exposition, while some cinematic shots at Grand Central Station station give the impression of a technically proficient film. But for a story that initially builds its universe with such patience and precision, it is quick to change pace with a recklessly underdeveloped storyline from writers Byron Willinger and Philip de Blasi. 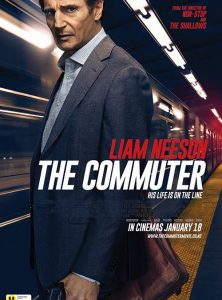 This turning point increases the pace of the film and sets the audience up for a captivating second act, but it’s simultaneously the worst thing about The Commuter, with all traces of realism sacrificed as an excuse for some cheap action.

Without giving too much away, it’s clear that Michael’s mission to find ‘Prin’ is part of a grand conspiracy, one involving powers much bigger than Michael, his family or Joanna, and one where discretion is paramount. Simultaneously, this cover-up is one that appears desperate to draw a lot of attention to itself, as casualties pile up on one another and large-scale infrastructure takes a hit.

This confusing scheme makes Michael’s obsession with beating up his fellow commuter less compelling, as it becomes increasingly unclear as to who is on who’s side, and why such fights are necessary at all.

The key is to not think about these plot holes and to instead sit back in your seat and watch Michael run amok. Through this lens, the film’s level of ridiculousness is its greatest asset with each silly development making the one before it seem more placid. The more you suspend your disbelief, the more you’ll be able to laugh as well, which culminates in a climactic moment stolen straight from one of Hollywood’s most famous movies.

For its genre, The Commuter is not the worst of its kind. Rather, it’s exactly what you think it will be, which should delight fans of the Taken franchise, while leaving everyone else rolling their eyes.

The Commuter is in cinemas from 18th January through Studiocanal.