If you kept up with any film news in 2017 it would have been hard to miss the equally turbulent and fascinating production of Ridley Scott’s latest. Filmed in early May with an all star cast which included Michelle Williams and, more to the point, Kevin Spacey, it told the factual story of when the grandson to the richest man in the world was kidnapped by Calabrian gangsters. Cut ahead to late October (less than a month before the premiere) when it came out that that Kevin Spacey had various accusations of sexual assault and harassment levelled against him, the extraordinary decision was made by Scott and co to recast the role with Christopher Plummer and reshoot all the scenes Spacey had appeared in, less than a month before it was scheduled to appear in theatres. So let that be a lesson to all: When your movie’s in the toilet, call a Plummer*.

This is the true story of Paul Getty (Charlie Plummer, no relation to Christopher), who at the age of sixteen was kidnapped in Rome and put up for ransom. He was eventual heir to the Getty dynasty, built on his grandfather’s oil fortune and owned by the infamously frugal J. Paul Getty ( Christopher Plummer); described as ‘not just the richest man in the world, but the richest man in the history of the world’. With a demand for $17M and time running out, Paul’s mother Gail (Michelle Williams) and a professional negotiator (Mark Wahlberg) try to keep Paul alive and convince the elderly patriarch to come up with the money, something he refuses to do even though his grandson’s life depends on it. 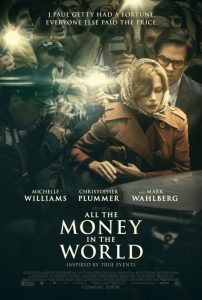 The film that’s resulted is one of mixed results, none of which seem to be on account of the uniquely troubled production. At the age of eighty Ridley Scott is managing to push out at least one film a year and he seems capable of making both brilliance or absolute messes. It appears to be a roll of the dice what we’re going to get nowadays with films carrying a ‘Directed by Ridley Scott’ credit. All the Money In the World isn’t a Counsellor level disaster, nor is it as misguided as Alien: Covenant, but what starts as a fascinating glimpse into the otherworldly splendour of the super rich, quickly becomes an unoriginal and strangely dreary kidnap procedural.

Most of the dialogue about this film will concern the decision to hit eject on Spacey, but this shouldn’t overshadow the fact that Scott has managed to pull a phenomenally good performance out of Christopher Plummer. When the word spread that these scenes would be reshot, many of us assumed that it would probably be nothing more than an extended cameo. In a surprising twist, Plummer would have to be present for at least one-third of the running time. His performance as the 1% of the 1% embodies a kind of corpulent greed which fed into this man’s strange mind. A man with whom contradiction was as prevalent as his expenses, it takes an actor with wisdom and experience to fill shoes as big as J. Paul Getty and Plummer has delivered. It’s a performance that would be exceptional even without knowledge of how it was produced – but factor in the astonishing feat that he signed on and managed to film his sizeable part in nine days and it becomes even better.

Williams and Wahlberg have a decent camaraderie together but they’re lost in Plummer’s shadow. Charlie Plummer too – this is a fairly good role to make his name but compared with the talent he’s acting across he doesn’t stick out all that much.

Credit is due to Scott and his creative team for their unprecedented reaction to finding out their leading man was a creep – which proved the right decision because the film is better for it – and the real history makes for a fascinating story, but all in all this seems like a wasted opportunity. A story like this is perfect to explore our current world, in which the disparity between rich and poor has never been larger and is only getting worse. Yet this is mostly a rather flavourless kidnapping drama with the occasional foray into much more interesting territory. If anything, see it for the amazing fact that Christopher Plummer is not only in this film, but great in it.

*As much as I’d like to claim it, the credit for that line goes to critic Justin Chang on his Twitter.

All the Money in the World is in cinemas from 4th January through Roadshow Films.

Written By
Simon Storey
More from Simon Storey
There’s never been a film quite like Endgame because the Marvel Cinematic...
Read More