What kind of film do you imagine when you hear the words “Andy Serkis‘ directorial debut”? The man who was at the vanguard of an entirely new kind of performance in the early days of motion capture and who has crafted an excellent career of acting and directing was always going to eventually have a go at directing a feature film. Breathe is a large surprise on this account, for the result is nothing like you’d expect.

This is the real life story of Robin Cavendish (Andrew Garfield), a very good looking young English man who had made his name and was working on his fortune in the tea business. He had a beautiful wife and a glorious future as a gentleman in front of him. But the fickle hand of fate soon deals Cavendish a particularly bad hand when he come down with what seems like a simple head cold. The year was 1958 and polio was still ravaging certain parts of the globe, Cavendish contracts it at the age of 28 and loses all muscle control from the neck down, even the ability to breath on his own. He is given three months to live but through the combination of a Never Say Die attitude and a wife (Claire Foy) with the patience of a saint, he not only survives but lives a worthwhile life.

Breathe is the kind of film that is rarely made nowadays. It feels like it should have been a TV movie in the mid-nineties. It’s a film about a man defying the odds of having one of the worst diseases imaginable yet it’s presented with toffee nosed Brits acting out a larger than life romance.There is not a single contentious or surprising idea; every possible sharp edge has been sanded off. This is the film equivalent of a marshmallow – lightweight, sickly sweet and with so much sugar it will rot your teeth. 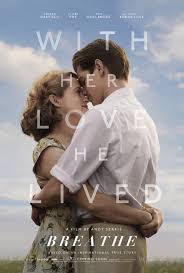 Much of this can be explained by a rather interesting element in the production. In 2011 Andy Serkis co-created a London based production company called ‘The Imaginarium’ which specialises in motion capture performances. It has worked on the recent Planet of the Apes trilogy, Avengers 2 and even the two latest Star Wars. It’s a very good question to then ask why has it done a complete 180 and is now investing in a extremely quaint British romance with not the slightest hint of CGI? The answer is a surprising one: Serkis created this production company with long time film producer Jonathan Cavendish – Robin Cavendish’s real life son.

Technically it’s all well made. Performances are all good – Garfield and Foy especially – and there’s a legion of good British acting talent backing up proceedings with a very charming vein of humour. The world class camera work by Oscar winning Robert Richardson is gorgeous; even if the film is let down by direction and tone it’s a truly beautiful film to watch.

Breathe is one of those conundrum films that critics have to wrestle with occasionally. It’s well made, has a beautiful message which it sows around the story of a truly remarkable man and his astonishing wife, and it wears its simplicity with pride. Many people will love this film – grandparents especially – but the cloying idealism and the dewy-eyed sentimentality that infects every frame makes it very hard to take seriously.

It’s difficult to hold anything against a film as innocent as Breathe and the reaction this critic had to it was probably a highly subjective one. Is it a perfectly middle-of-the-road British weepy with some great performances and a story worth telling? Yes. Did I enjoy watching it? Absolutely not.

Breathe screened as part of the Cunard British Film Festival and has its national release on Boxing Day.

Written By
Simon Storey
More from Simon Storey
There’s a quote that gets thrown around by both comedians and pessimists...
Read More