Ever since it got its long awaited debut at Sundance at the beginning of the year Call Me by Your Name has earned a reputation as one of the best films of 2017. Australia is one of the last major markets to see it released (the UK and USA got it in October and November respectively) and with its heralded arrived it’s a pleasure to write that the latest film by Italian director Luca Guadagnino is everything and perhaps more than its reputation makes it out to be. This is nothing less than a revelation.

Set, as a title card tells us, in 1983 ‘somewhere in Northern Italy’ this is a classic tale of first love but made with a degree of such raw talent that it has earned every familiar story beat. Foremost this is the story of Elio (Timothée Chalamet), a good looking young man of seventeen living in the villa that his father (Michael Stuhlbarg), a professor of archaeology, is using for research. It’s a picturesque paradise where the sun seems to perpetually shine in a late afternoon haze and the cicadas’ drone is ever-present.

Elio spends the majority of his time reading, honing his immense talent for piano or laying in the grass as the afternoon hours melt away. He’s the kind of young man whose intelligence well outpaces his wisdom, who has read a lot about the world but has experienced select few things in it. Things change in a rather dramatic way when his father’s research assistant arrives from the States. This is Oliver (Armie Hammer), the brawn and slightly brash mirror to Elio’s introvert. Needless to say, as time goes on the two find a kinship and as the summer gets warmer, maybe something more.

Adapted from the 2007 novel by Andre Aciman, Call Me by Your Name is the kind of film that will leave you thinking about it for days afterwards. This is a film of layers, which only get more beautiful and even more sage the more it’s ruminated on. First and foremost this is due to the chemistry between Hammer and Chalamet, which a lot has been written about for a very good reason. 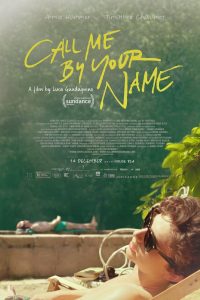 Timothée Chalamet has appeared in a few films before this but none of them come close to his performance here. This has to be the most assured breakthrough of 2017. In a single expression he can change a scene or show a frankly shocking amount of emotional depth. He doesn’t say a whole lot but he makes every word count, it’s the little touches and expressions between the words that somehow speak the loudest. It’s doubtful whether any other actor could have done such justice to this role. Whoever cast Chalamet is responsible for discovering one of the performances of the year.

Across from him is Armie Hammer and, in a smaller but equally important role, Stuhlbarg. Hammer has been been a big name for about a decade now but we’ve never seen him quite like this before. He and Chalamet have a relationship on screen that is totally devoid of sentimentality or falsity. When they fall in love they fall hard and it’s a very rare thing to capture love as believably as this. No film has captured intimacy or that all-consuming desire so beautifully for a very long time.

Stuhlbard as Elio’s father stays in the background for most of the film, until one scene towards the end which will go down as the most profoundly moving dialogue of 2017. Good writing can do nothing less than change a life, and any young people still discovering themselves are well advised to see this solely for this scene. Writing as a straight man it left me in tears – this could be revelatory to a young person coming to terms with their sexuality.

This isn’t just a beautiful love story in the confines of the current renaissance of Gay Fiction. The themes and chemistry that lie within are works of art in themselves. Every single piece from the acting to direction to cinematography to the music by Sufjan Stevens’ is exceptional. When seen on its own it’s a wholeheartedly beautiful trip back to that sweet spot of summer in youth. When compared with similar works it’s ever better.

As a film it’s absolutely beautiful. As a piece of art, it’s nothing less than profound.

Call Me by Your Name is in cinemas from 26th December through Sony Pictures.

Written By
Simon Storey
More from Simon Storey
There can’t be many people more revered in the history of rock...
Read More