All credit to 20th Century Fox. Any studio that opens an animated film on the same day as the new Star Wars is either crazy confident in their product or drew the short straw and has to commit box office seppuku. But try they have with the newest film by Blue Sky Studios, a loose adaptation of a children’s book from the 1930s which has a lot of heart but not a great deal of brains.

Ferdinand (voiced as an adult by none other than John Cena) is a massive 600kg Spanish Fighting Bull, raised and trained to one day take on a matador in the bull fighting ring. But after escaping from the farm he was raised on, Ferdinand realises he doesn’t want anything to do with fighting, preferring to grow flowers and find non-violent solutions to his problems. As he grows he is taken back to the farm after a misunderstanding, and with a bunch of colourful characters at his side has to try and find his way home and away from the threat of the matador’s arena. 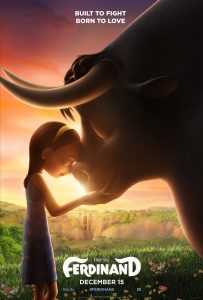 As far as animations produced by 20th Century Fox go, Ferdinand is par-for-the-course. It’s not as good as Rio and not even on the same planet as the average Pixar offering. It’s average in just about every sense, the level of quality we’ve come to expect from many summer animations, especially since Ice Age has essentially whored itself out to the people who work at the sequel factory.

John Cena has had a surprisingly good year. His voice work is fairly good and with his strong presence in The Wall he’s managed to make the transition to actor a lot better than many other sportsmen. Kate McKinnon, another star who has made their name in the last year or two, seems to be improvising a lot of her lines as a slightly mad goat, which is fun for a while but quickly gets annoying. Considering the setting is Spain, a lot of Hollywood’s latino talent get to lend their voices, which is kinda cool because Spanish accents are always good to listen to.

Some may find the setting of a bull fighting arena to be a strange backdrop to a children’s film. The message is the stock standard summer animated meme of being kind and not judging others based on how they look, but it’s played out by characters who are destined to compete in the extremely bloody man/bovine gladiatorial arena of the matador. A few parents might find this a little confronting, but considering the film takes the side of the animals over the humans, it earns a pass on the ethical front. Although, the fact that the same people can get passionately angry about a sport in which bulls are maimed and killed but still buy factory farmed meat which directly finances an industry which slaughters 65 billion animals a year, does betray a simple case of selective outrage.

There’s nothing too impressive or memorable about Ferdinand but the colours are vibrant and the simple message is nice. The important thing is that the sprogs will probably have fun with it during the school holidays.

Ferdinand is in cinemas from 14th December through 20th Century Fox.