Just to be Sure (Ôtez-moi d’un Doute) is charming and funny, and perfectly timed for the holiday season.  Erwan (François Damiens) is a bomb tester and removalist; he and his team travel around France testing and removing bombs and mines left in situ after the end of the war.  This job plays as a nice little metaphor for the explosions Erwan is going to have to deal with in his personal life.  Thankfully he is used to detonation, so he should be well prepared.

Erwan’s daughter Juliette (Alice de Lencquesaing) is having a baby, and she has had tests to confirm if her baby will be at risk of a genetic disorder carried by Erwan’s father.  The baby is not at risk, because Erwan’s father (Guy Marchand) is not his biological father. 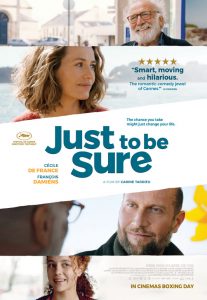 Erwan takes the news quite well; his calm demeanor is unruffled by this bombshell. When he enters into debate with Juliette she encourages him to seek out his biological father, using all his own arguments against him. He has been insistent she allow her baby to know its father, Juliette wants the one night stand left in the past and for the father of her baby to remain a mystery. Erwan pushes his point, only to have it pushed back on him – he should know his own father too.

Hiring a private detective, Erwan finds and befriends the mystery father, Joseph (André Wilms).  In the meantime, he meets a gorgeous and forceful doctor, Anna (Cécile De France), with whom he becomes quite enamored.  Until he discovers she is probably his sister.

Just to be Sure is funny but dry in the way of similar French films (Rosalie Blum), not saccharine as would be expected from a Hollywood rendition of the material.  The side plots are great, and generally casting is excellent.  Damiens as Erwan is wonderful; his physical presence is understated but potent, and as the key contact for each of the other characters, he brings out the best in his cast mates.

Directed by Carine Tardieu, Just to be Sure has a subtle question at play; at one point a character observes that ‘everyone has a father’, but do we actually need to know them?  The collection of fathers and potential fathers in Just to be Sure are mostly pretty good, but are they necessary to the lives of their offspring?  Curiously, with the exception of Juliette, there are no mothers in this film – all are absent or deceased. The relationships which play out between the two father-daughter combinations (Erwan and Juliette, Joseph and Anna) are both amusing and interesting – Damiens and de Lencquesaing are particularly well cast, and together they take a nice little cinematic emotional journey. The film brings a nice conclusion, and answers the questions around paternity versus parenting rather well – perfect in the lead up to Christmas.

Just to be Sure is in cinemas from 26th December through Palace Films.

Written By
Amy Taylor
More from Amy Taylor
Set in Sydney, Alex & Eve is about the clashing of culture and...
Read More