At the beginning of Downsizing, we’re asked to imagine two things. The first is that world is on the brink of ecological disaster and overpopulation, a premise that hits close to home. The second is a little less fathomable, but a nifty solution regardless – that mass shrinking and the development of utopian micro-communities is the antidote to this issue. Director Alexander Payne doesn’t expect us to believe that this is anything more than a fun science fiction thought experiment, evident by his comedic styling and jovial soundtrack. As such, he gives Downsizing all the makings of a great allegorical novella, sharing the same foundations as satirical yet profound films like The Truman Show, Idiocracy and Stranger Than Fiction.

Unfortunately it doesn’t take long for writing pair Payne and Jim Taylor to lose focus, instead investing too much effort in finding ways to entertain their protagonist Paul Safranek (Matt Damon). Paul is an American occupational therapist whose decision to become a ‘little person’ is ruined by his wife Audrey’s (Kristen Wiig) last-minute decision to remain normal sized. In doing so, Payne and Taylor fail to extract enough comedy from their premise and are unable to capitalise on the intriguing world they have created. As the rules of their microverse begin to cave in, Downsizing is quick to run out of good ideas and never becomes the poignant satire it hopes to be.

Taylor and Payne appear to be aware of the dangers of the micro-society they have built, throwing in tidbits about national citizenship, downsizing as political torture, and illegal immigration through TV news snippets and bar-room quarrels. The only worthwhile idea they give any airtime to is that of class struggle, which they depict in a clever fashion. But just as the film looks like it could be making a bold political statement, the duo return to their convoluted Damon-heavy narrative that ultimately sees them spend a long time (2 hours and 15 minutes to be precise) saying nothing. 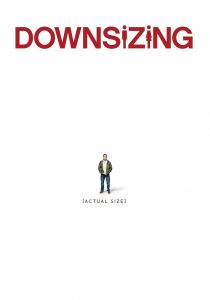 As convenient as it would be to suggest that Downsizing needs to downsize its duration (a gag I’m sure my fellow reviewers will be struggling to resist), the fact is that the running time is the least of the film’s worries. What’s more offensive is the film’s rudder-less motive-free meandering that sees Paul traverse through banal cubicle jobs, drug-induced dance floors, guilt-induced philanthropy and Norweigan fjords. At one point, he self-referentially summarises the plot by joking about the ridiculousness of his situation, not dissimilar to Homer Simpson chronicling the history of his employment. But the joke is on the audience who are continuously forced into joining Paul on his meaningless tangents and listening to his laboured exposition.

In trying to assess how Downsizing so poorly missed the mark, one can only suspect the film was rushed through the production process without much interrogation of the script or consensus around the style. The colour grading is fit for a comedy, as is the upbeat score, while scenes merge into one another with Kubrick-esque fades. For every contemplative scene that ends without resolution, there are unexpected moments of cheap comedy, some of which might well leave the film with an inaccessible MA brand. It’s an unsettling mix of stylistic choices that continue all the way until the film’s vague final moments.

Such inconsistent direction and editing make it hard to assess the actors, who are limited by the screenplay. Damon is solid but far from his best, Christopher Waltz is nothing more than a self-caricature, while Thailand-born American actor Hong Chau is commanded to feed her lines through a cringeworthy (and borderline racist) Vietnamese accent.

By attempting to chase Boxing Day sales through their big-name lead, Downsizing wastes its opportunity to be anything meaningful. But expectations of its premise aside, Downsizing is fundamentally a poorly-constructed film caught somewhere between satire, drama, comedy and fantasy.

Downsizing is in cinemas from 26th December through Paramount Pictures.