In Sweet Virginia, director Jamie M. Dagg explores the intersecting lives of several people in a small town, and the ways in which these are disrupted by the unexpected arrival of a violent stranger. Anchored by Christopher Abbott’s quietly absorbing and unnerving central performance, the film largely succeeds at conjuring a taut tension throughout, largely on the grounds of its score and cinematography. However, the film’s screenplay errs too heavily on restraint, and we are left wanting for more insights into these characters to fully engage our attention. Unfortunately, the film demonstrates the necessity for a complementary balance between plot and mood, and in privileging the latter it is less engrossing than it could have been.

The film opens with a mundane enough scene. Three men are relaxing and having drinks after closing a restaurant for the night. Elwood (Abbott) enters and, despite being told that the restaurant is closed, briskly orders a meal. When he is refused and forced to leave, he returns with a gun and dispassionately shoots all three men. No explanation is given. Later, Bernadette (Rosemarie DeWitt) is grieving her husband, who was one of the men killed in the incident. Her friend Lila (Imogen Poots) is there to console her, although it is soon revealed that she is the reason for Elwood’s presence in the town. There is also Sam (Jon Bernthal), who runs the local motel and who has been having an affair with Bernadette for some time now. Elwood’s plans in the town soon fall apart, and they all become pulled into his path as he becomes increasingly agitated, unpredictable and violent. 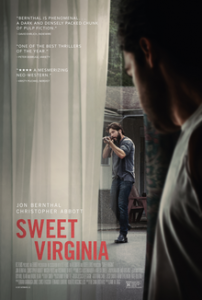 Mood is critical to the film’s success. There is an assured pacing to the film, complemented by sombre, moody cinematography. Shot compositions are precise, almost effortlessly intimate, and imbued with an unsettling stillness. The camera movements are patient and stealthy, often fixated on individual characters for uncomfortably long periods of time. When there is music, it is eerie and mysterious, but often the oppressive sounds of silence pervade, inviting us to fill in the gaps with conjecture and foreboding. Together, all of these elements generate an unassuming tension. The camera is in full control of the audience’s gaze.

However, where the film is let down is in the screenplay by Benjamin China and Paul China. Although the score and the cinematography do a lot of work in setting the atmosphere, this is not enough to compensate for the lack of character development. Some insights about the characters become apparent in intimate moments alone, but not enough information is provided about their histories, motives and futures for us to be fully engaged. We are instead provided a snapshot from a short period of time that seems too detached from the rest of their lives. So whilst Abbott is given the most interesting role to work with – his performance navigates between unsettling casualness, nervous inscrutability and unbalanced impulsivity – he also remains disappointingly enigmatic. We are given some hints about his personal life through a phone call with his mother, but the details remain frustratingly elusive. This is symptomatic of the film as a whole, and because its atmospheric elements appear to overcompensate for a thin, underdeveloped plot, we are left wanting more.

Sweet Virginia is in cinemas from 30th November through Icon Film Distribution.