Writer-director Noah Baumbach’s voice is distinctive in contemporary cinema. Depicting life with quirky humour, poignancy and a deep well of empathy for his often flawed characters, Baumbach’s work has come to embody peculiarly modern manifestations of ennui, restlessness and dysfunction. His latest film The Meyerowitz Stories (New and Selected) bears all these hallmarks, although its focus is skewed towards the relatively more sobering dynamic of an ‘older’ family than his previous films. It is not his strongest or most accomplished work. Nevertheless, it does feature engaging performances, a quick-witted, layered screenplay and a well-structured plot, even if collectively these are perhaps not enough to distinguish it from his more unique and memorable directorial efforts.

The film is divided up into sections, each focused on a different child and their relationship to their father Harold Meyerowitz (Dustin Hoffman). Harold is a sculptor of some renown, whose overbearing ego and pettiness has scarred his relationships with his children. They are coming together to celebrate his career retrospective, and being in close proximity with each other revives suppressed feelings of bitterness and resentment. The first chapter focuses on Danny Meyerowitz (Adam Sandler). Divorced, unemployed and grappling with his teenage daughter Eliza’s (Grace Van Patten) imminent departure for college, he is trying to regain a sense of direction and control over his life. In another chapter we meet Matthew Meyerowitz (Ben Stiller), a successful accountant and Harold’s obvious favourite. There are clear tensions between Matthew and his step-siblings Danny and the oft-overlooked Jean (Elizabeth Marvel), but each of them has their own unresolved familial baggage. 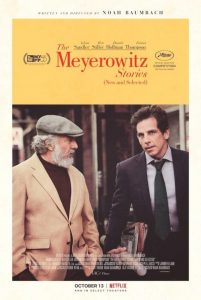 The film has many of the trademarks of a Baumbach film. Acumen for the nuances of family relationships. Compassion for his characters despite their shortcomings. Dialogue-driven dynamics. Stirring moments of familial connection; visceral outbursts of remorse and unhappiness. These trademarks are brought to life by strong performances across the board.

Hoffman’s Harold is definitely not the most attentive or affectionate father, but his portrayal does not attempt to downplay or mitigate these deficiencies. Instead, he reflects and affirms his children’s perceptions to exasperating effect. Marvel arguably makes the most of her limited screen time. She exudes a weary, resigned warmth that earns our empathy, despite or perhaps because of the ways in which her story is neglected, both by the characters and the film as a whole. But it is Sandler’s performance which lingers the most afterwards. His talents have not been utilized this effectively since Punch Drunk Love, and he plays a somewhat toned version of his character in that film. Despite being well-intentioned, Danny is also beset by a stubborn pride and a short temper, which hold him back from making more concerted personal progress.

However, despite all of this, the film lacks that characteristic spark of his strongest films, which (in this reviewer’s opinion) are The Squid and the Whale and Frances Ha. Its more sobering tone may have something to do with this ‘lack’, this absence, but it may also be due to the film’s more muted, restrained style. The Meyerowitz Stories affirms Baumbach as a vivid, even vital, voice in contemporary cinema, even if it may not resonate to quite the same extent as some of his earlier films.

The Meyerowitz Stories (New and Selected) is now screening on Netflix.