When you add Justice League’s troubled production – which involved director Zack Snyder having to step down for personal reasons and Joss Whedon having to shoot 15-20% of the movie – to night-before-release screenings for reviewers and ratings embargoes, things didn’t look good for DC/Warner Brothers’ latest franchise tentpole. Snyder’s last film, Batman vs Superman (BvS), was a critical disaster, a toxic mess of humourless self importance, and with all three Marvel films released this year well received, the competition between these two comic giants meant a lot of pressure on Justice League.

It’s unlucky for those involved with Justice League that it’s come out so close to Thor: Ragnarok. They are essentially the same film, and their release proximity means the former will suffer in comparison. It lacks the originality of vision and the directoral deftness of Taika Waititi’s film, but Justice League is DC’s best movie behind Wonder Woman. Snyder seems to have found his middle ground between the Day of the Deads and the BvSs of his career with a film that, while still the standard superhero fare, is able to climb out of the shadows.

Justice League follows directly on from BvS and the death of Superman (Henry Cavill). Batman (Ben Affleck) is tracking an alien presence that’s been attracted to Earth after the demise of the planet’s protector, sensing a world broken by the loss and ripe for conquer. That villain is Steppenwolf (Ciarán Hinds), a being who turns worlds into hellscapes and who was once forced to retreat from Earth by a coalition of the world’s greatest heroes. Knowing he can’t defeat this powerful enemy on his own and inspired by Superman’s sacrifice, Batman gathers together those with super abilities to form a new heroic league. 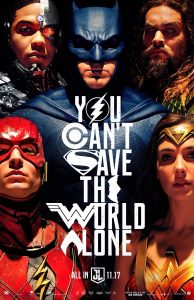 One of the major flaws of the film is the complete template plot, which runs the exact same course as countless superhero movies before it. There’s the huge, CGI antagonist with practically infinite, unexplained power who’s introduced via expository flashback. No real motive, no real understanding, no real investment in the creation of a villain. There’s the all-powerful, potentially world ending MacGuffin (not Infinity Stones, Tesseracts or Eternal Flames, but now Mother Boxes) that the heroes must band together to stop from falling into the wrong hands. There’s the faceless army of drones that serve as cannon-fodder in climatic Big Battle™ fight sequences set in (depopulated!) areas that just look like one giant soundstage. There’s also the stakes – it’s always the end of the world, the fate of humanity at risk. But there never feels like there are consequences or permanence to these things. The parts of this film with human interaction, where the heroes face their personal problems, their grief, their fear, their guilt, have more power than the possibility of the world ending (again).

Though those involved in production play it down, saying this is still Snyder’s film, there can be no doubt that having Whedon write the screenplay and assist in direction has made a real difference. While there’s still the headbanging unsubtlety that Snyder’s known for, there’s noticeably a finer balance between lightness and seriousness, a doing away with the pretension that’s plagued the previous films and a new sense of fun, a recognition of the inherent absurdness of the situation. But the script still suffers from clumsy dialogue (like “it truly was the age of heroes”), deals with subtext with big flashing signs, and the narrative direction is all over the place. There’s no real through line or cohesion between the scenes, so until all the heroes are together we jump all over the place from location to location, trying to reconnect with established characters, introduce new ones, set up the formulaic plot, or build in some backstory.

While the addition of extra heroes chops up the narrative, having Wonder Woman (Gal Gadot), Aquaman (Jason Momoa) and Flash (Ezra Miller) brings a completely different dynamic to the interaction between the superheroes. Momoa’s Aquaman is refreshingly blunt and his screen presence show he needs a film with him front and centre – though an incredibly underwhelming underwater action sequence will give you pause over the Aquaman standalone movie. Miller is excellent as the semi-audience surrogate the Flash, the wide-eyed comic relief who can’t believe what he’s landed in the middle of. Ray Fisher’s Cyborg on the other hand is a complete waste of screentime. The character serves little more than plot purposes and the attempts to portray his struggle with his newfound powers are distinctly uninteresting. Affleck has lightened up on the neuroses that drove Batman in the last film, opened him up and leaned into his age, having him become more aware of his limitations. But it’s Gadot that’s the real heart of the film. While there’s some thought of creating sexual tension between her and Batman, and of having her act like the mother of this group of armoured boys, that’s thankfully minimised and she stands out as the true embodiment of goodness, of the type of classic heroism that Christopher Reeve’s Superman played, which lifts all around her.

It certainly has it problems and scores low on the originality scale, but by avoiding the pretension, the seriousness, the grime and the toxicity that maligned the series’ previous efforts – and by adding in more humour, more heroism, more lightness – Justice League becomes the right sendoff should this be Snyder’s last DC movie.

Justice League is in cinemas from 16th November through Roadshow Films.

Written By
David Nagle
More from David Nagle
The major criticism of Silicon Valley in its first season was the...
Read More