Anyone hoping for grounded realism in the work of Yorgos Lanthimos can look elsewhere. A thematic summary wouldn’t put it too far from that of Homer, and the emotional detachment is certainly similar. The difference is that stylistically what this man brings in style is almost painfully sober, but still it is as if his characters were possessed, channelling careful words merely in the service of some grander parable. By its very title, The Killing of a Sacred Deer invokes the mythical, but where a parable may have a moral lesson to impart, Lanthimos’ mind is aboard a darker train of thought. Penned for the screen by Lanthimos and Efthymis Filippou, these are harsh lessons in manipulation and control meant for a queasy stomach.

Coming from the bottom of the food chain in The Lobster, Colin Farrell here finds himself at the top as Steven, a well-to-do cardiologist playing god on the operating table. He is confident in his skills, comfortable in the belief that, as a surgeon, he has personally never killed a patient (that was the anaesthetist). Alongside his wife ­­­­Anna (Nicole Kidman), his life has settled into the neat groove of the upper middle class. But he also has an admirer, a teenager called Martin (Barry Keoghan) who claims to be interested in doing what Steven does. Martin initially seems to be a vulnerable kid in need of guidance, but his sleepy facade has murkier depths to tread. As the bond between the two grows and Martin’s attentions begin to circle closer to home and to Steven’s two kids, Kim (Raffey Cassidy) and Bob (Sunny Suljic), Steven begins to realise that Martin seeks more than companionship and that something has to give. Just giving what is the question. 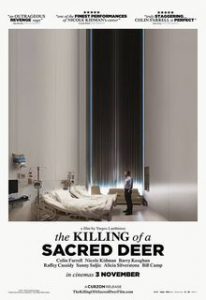 The humour of The Lobster meant it tended more to whimsy and stopped at discomfort, which partly explains why it became 2015’s sleeper arthouse hit. Also it had people turning into animals, so there’s something for everyone there. Sacred Deer, being set in the muted greys and clean benchtops of private hospital cover, comes from a much colder place, its cast of A-listers demonstrating all the expressiveness of a cast of mannequins while caught in an insidious game of chicken. In the context of whitewashed suburbia and a characterless modern architecture, perhaps the relentless monotony of Lanthimos’ dialogue, pacing and plotting shouldn’t be a surprise, but it is no less unsettling. Or is that bemusement? All in the eye of the beholder but Sacred Deer in its minimalism walks a fine line between tedium and suspense and doesn’t always fall on the right side.

If it sounds all a little vague in description, this owes to at least a willingness to preserve Sacred Deer’s unpredictability, particularly given that its trailer has done a remarkable thing in this day and age by not giving it away already. Suffice to say this pyschological thriller’s back end is more intriguing than its front, and combined with a slowly patrolling camera and the atonal dinner-plate screech of its score, the feeling of the viewer is one of playing the voyeur on a crash site. It’s that horrifying initial feeling of when you’ve just murdered your first ever Sims character just to see if you could, and you’re not quite sure who you’ve just become. That feeling when you discover that humanity’s mask of civility can be rather unconvincing.

So is this worth seeing? Yes. Is it enjoyable? No.

The Killing of a Sacred Deer is in cinemas from 16th November through Madman Films.

Written By
Angus Tonkin
More from Angus Tonkin
Fourteen years on from the original Ice Age, it's hard to believe that...
Read More