After Obama’s election in 2009 there was an influx of films about slavery and race relations. Every film is affected by the period and culture is was made in, which is largely affected by the administration in power at the time. By this logic there seems to be a new movement we might call ‘Trump Cinema’. The Founder came out one year ago which lined up perfectly with the result of the 2016 election, both of which involved a ruthless capitalist coming to power after swindling and bullying his enemies into submission. Last month’s Beatriz at Dinner seemed to capture the new zeitgeist perfectly, as the rich white elites sit in their ivory towers blissfully unaware of the suffering underclass beneath them.

The newest entry has to be Brad’s Status, the latest directing feature of Mike White (who also made Beatriz at Dinner). The film is an exploration of male anxiety and the changing culture of generational aspirations. Brad (Ben Stiller) has just reached the age where he has to admit he’s over the hill. His is a a good life, with a loving wife (Jenna Fischer) in the suburbs of Sacramento and a business that has always broke even. His son Troy (Austin Abrams) is just about to start college, so he and Brad travel to the east coast to look around at colleges, which finally sparks the existential crisis that Brad has been trying to avoid.

There can’t be many things worse than disappointment and Brad’s Status is an excellent exploration of the topic. Much of this is due to a career best performance by Ben Stiller, who walks a precarious ledge of having a character that isn’t that likeable but wholly relatable to anyone who has aspirations of success. 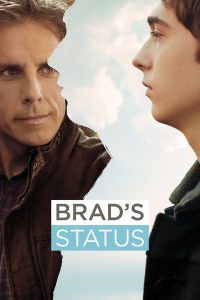 Brad is a man whose dream of youth was to change the world – to be known and be important. Instead he’s living a perfectly adequate life with nothing extraordinary or memorable to show for it. He’s closer to the end than he is to the beginning, and there’s that nagging sense that time is fast flowing by.  Compounding this is the knowledge that his three best friends from college have all managed to fulfil their aspirations with power, wealth and prestige.

Films about mid-life crisis can go a few different ways, at best they produce Sideways or American Beauty. At worst they just dissolve into well off people feeling sorry for themselves. Mike White seems to know how the audience is going to react to Brad and it’s a feat of brilliance that his script manages to make his main character empathetic. There’s a warmth and insight into the mind of a middle-aged man that marks White as a talented writer. This isn’t just a film about a man filled with self pity; this is a genuine look into the real world and complexities of the human condition.

Stiller seems to have been made for this role. So much of this film is filled with his voice over, meaning that most of his time is him looking around lost in his own thoughts. The way Stiller manages to show the entirety of his emotional journey through his facial expressions is amazing.

As a document looking at the changing nature of our world, with the uber progressive millennial generation who are just about to start voting, Brad’s Status manages to capture a unique look into the fears and worries of the older generation. With a wonderful lead performance and a script which has true empathy for the human condition, this is a film that questions the complexities of its main character’s anxieties. Don’t be surprised if you start to ponder your own.

Brad’s Status is in cinemas from 9th November through Roadshow Films.

Written By
Simon Storey
More from Simon Storey
The Guernsey Literary and Potato Peel Pie Society is a terrible name for...
Read More