The only primary level boarding school in Ireland is Headfort. Students from all over the world travel to the emerald isle to be a part of this old yet surprisingly progressive school. It looks like something out of a Dickensian period drama, housed in a magnificent 18th century manor which could almost be straight out of Downton Abbey.

The focus of Neasa Ní Chianáin’s documentary is the husband and wife teaching duo John and Amanda. For close to half a century they’ve lived and taught at Headfort, both clearly good at what they do and both happy with their contribution to the world. They’re a charming couple who have given their lives to this institution, but time has caught up to them and retirement looms.

School Life will make you think about a lot of different things. For one, the way the school operates seems to be independent; they have all the usual subjects but their approach is unique. Instead of putting everyone on the same level, knowing all the same things so they end up all thinking the same, Headfort seems to want every child to figure it out for themselves. These children aren’t belittled or talked down to. In the surrogate family of boarding school they prop themselves and each other up. 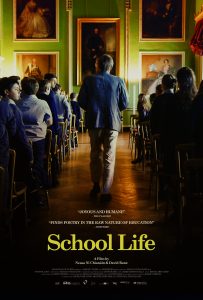 There are little things like the a teacher going over and giving a child a hug, such a simple yet beautifully human moment which seems like a rarity in this day and age when teachers aren’t allowed to make physical contact. Instead of levels of bureaucracy this is an institution which seeks to give the children in its care the tools they need to go out into the world and function as well-adjusted adults. It’s what every school strives to do, but in this case it actually seems to work.

John and Amanda were an amazing find. There are no talking head interviews or voiceover here; it’s a simple fly-on-the-wall documentary about these two. The school year which serves as the span of the film might be their last; they’ve been doing this for a very long time and it seems like they’ve earned some time for themselves. They seem to have two states: smoking and waiting for a good time to sneak away for a smoke. John in particular is a fascinating man. He has a very healthy pessimism about him and isn’t afraid of a little brutal honesty now and then. His hope for the future seems to have disappeared around the same time the hair on the top of his head did.

Anyone who is a teacher or has any interest in the school system is well-advised to check out School Life. It’s a charming and strangely immersive look at two remarkable people, but also an insight into a unique school which seems to be doing its job exceptionally well.

School Life is in cinemas from 2nd November through Antidote Films.

Written By
Simon Storey
More from Simon Storey
In 2008 Lehman Brothers - the fourth largest investment bank in the...
Read More