James Wan and Leigh Whannell were friends at Melbourne’s RMIT when they wrote and made a short film called Saw. The rest is history; this short film which cost a grand or two eventually became the highest earning horror franchise of all time with a really simple and effective business model: there was one Saw film made per year until the box office dropped and then they wrapped it up.

Now, seven years later, the latest in the ever growing list of soft reboots is Jigsaw. Directed by Australian pair The Spierig Brothers, it bills itself as a new direction to the Saw franchise but ends up just being more of the same. In all but name and a new slate of characters, this is just Saw VIII – the same premise as before but slightly tweaked. Five people are locked in a barn which contains lots of gruesome traps, a lot of them die in ways that involve lots of splatter gore, they confront the demons in their past as all the while a group of detectives try to figure it all out. 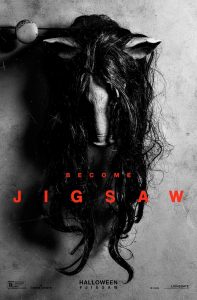 There’s little more to say about Jigsaw than if you like Saw films you’ll like this one. Don’t go in expecting something revelatory or new; this is exactly what we’ve come to expect after eight of these: traps, gore and a third act twist. For better or for worse it looks like this series is going to just go back into its comfortable niche.

The new lead character this time is a morgue attendant played by Australian actor Matt Passmore doing a very convincing American accent. I spent most of the film trying to figure out where I knew him from – it was only after looking it up I realised that I had spent many afternoons after school watching him on Play School. One of the surprising and most amusing things about the diaspora of Australian talent to Hollywood is that actors from children’s TV and McLeod’s Daughters get to be in everything from last week’s Thor: Ragnarok to the latest torture porn reboot.

As a franchise Saw had the smarts to make itself accessible to any newcomer but also have a depth of lore to reward its dedicated fans. This plays out here with one character who has grown obsessed with the Jigsaw killings and tried to replicate some of the devices. The first Saw came out in 2004 so I guess it’s old enough for those of us who grew up when they were coming out to get a little reminiscent about the old Halloween tradition. It’s really strange how you can get nostalgic looking at gruesome torture devices.

For longtime fans, or even newcomers, Jigsaw delivers exactly what we’ve come to expect from a Saw film. It’s not particularly scary – none of them are – but we’re gifted with a few really effective suspenseful set pieces plus sufficiently inventive and gruesome ways to see a bunch of people die horribly. Happy Halloween everyone.

Jigsaw is in cinemas from 2nd November through Studiocanal.

Written By
Simon Storey
More from Simon Storey
After its near death experience in 2008 the financial industry under Wall...
Read More