With bitter fighting taking place over basic human rights in Australia, a movie about listening to the stories of others, about understanding – yourself, others, your place in the world – about wanting to be part of a place that accepts everyone, sounds like the kind of movie we could do with right now. Ben Elton’s Three Summers, his first film in seventeen years and an all-Aussie production that he wrote and directed, is that kind of movie. It’s pretty loose and groaningly obvious in places, but that’s part of its charm. Many plot lines are laughable in the way in which they play out, but it’s hard to shake this comfortable feeling from it. You can see and appreciate the best intentions at its heart, even if it doesn’t all quite work.

Inspired by Elton’s long-time attendance of the Fairbridge Folk Festival in Pinjarra, Three Summers takes place, unsurprisingly, over three summers at the fictional Western Australia music festival of ‘Westival’. It follows the stories of the artists and festival-goers that attend this type of festival across the world – like the pub rock dad band; the middle-aged couples there more for the drinking than the music; the kids finding themselves; the artiste who sees themselves as above it all. Three Summers centres around the unexpected romance between feisty Keevey (Rebecca Breeds), lead singer of a folk band, and pretentious Irish Theremin player Roland (Robert Sheehan, whose charm just manages to make his character’s assholery tolerable). 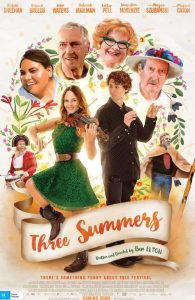 This mismatched romance might seem like the film’s focus, but it becomes clear that what Three Summers really wants to talk about is diversity, about belonging, about Australia. And it does so in very unsubtle ways. The characters are written in big, broad strokes, their overriding characteristic neatly placing them into little plot boxes. Here’s the Indigenous elder (Kelton Pell) who’ll show us the authentic Australia. Here’s the grandad (Michael Caton) who was shipped over here as a child and embodies that colonial thinking – that he built Australia, that he owns it. Here’s the young refugee boy who will show us the future face of the country. And here’s how they all come together at a festival that’s like “Australia under one tent”.

It’s all pretty saccharine and simplistic, but it captures the infectiously positive vibe that emanates from these types of festivals. The feeling of repetition, change and evolution all happening at the same time. The jokes aren’t ground-breaking – a few of them don’t land – and it also takes some on-the-nose paths in its plot and dialogue. There’s also, ironically for a film with music at its heart, no real rhythm to it, no real connective pace between the collection of scenes. And, while some seasoned actors nail their smaller parts (like Kate Box as an overzealous security guard or Magda Szubanski as radio host Queenie), newcomers struggle to convince.

But, for all its flaws, Three Summers ultimately gets by on its charm. It makes you want to go to ‘Westival’, and fills you with a bit of hope about the future of Australia.

Three Summers is in cinemas from 2nd November through Transmission Films.