Vincent Van Gogh‘s life as an artist and crazy man is celebrated in Loving Vincent. Directed by Dorota Kobiela and Hugh Welchman this is the first fully painted animated film to use the same brush stroke technique as the artist in question. It took six years to make and 125 artists to paint  6500 individual frames, whilst the footage of the actors playing out the scenes are projected over canvases and also painted on. It is really sublime. As a sort of biographical piece does it tell you everything about Van Gogh? Maybe not.

Loving Vincent takes place a year after Van Gogh’s death. Family friend Armand Roulin (Douglas Booth) has been sent by his father Postman Joseph Roulin (Chris O’Dawd) to deliver a letter to Theo, Van Gogh’s brother. Along the way obstacles are met and different variations of Van Gogh’s personality are colourised and brought into context, as it appears Theo has in fact passed as well.

Roulin believes he must continue to learn about Van Gogh as a duty of care to his father and for his own understanding. Through Roulin’s journey we learn a bit more about the artist. 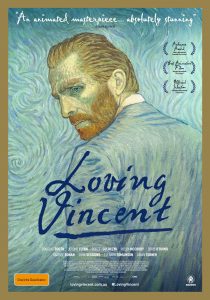 What is really striking about Loving Vincent is the texture and visuals of the film. You can physically feel and smell it. Most of these characters were based on Van Gogh’s paintings and brought a level of familiarity for those in the know. But there is a bit of rawness to this. Perhaps coming from the different artist’s brush stokes and perspectives, from time to time you do get differently painted characters to their prior representation. Mixing up conventions a little made it more collaborative and did put a smile on this reviewer’s face.

Loving Vincent is a unique way of looking at and absorbing Van Gogh’s work, other than a gallery space. The colours, the faces and the brush strokes may be familiar, however the reason why Van Gogh sliced his ear off remains a mystery, and it is all very comme ci comme ça. As a biographical piece you had to rely on the perspective of  the character Roulin for a more in-depth exploration.

Bringing to life such a crazy, eventful story through cinema, it feels like this film wants you to look at it in admiration. Unfortunately, you are outside the film world. Or perhaps this is intentional, like the art gallery.

However, being outside does mean you can be brought back into the film; the vocal range draws in human qualities. A mixed range of voices proves beautiful and interesting. It carries the story and the journey to a logical spatial representation in a modern and accessible way. More importantly it gives the film a much needed lift.

In Loving Vincent there are plenty of things to be in awe over, but that all depends if you want to look or be absorbed. Bearing in mind the artist in question, there’s still a level that didn’t take me beyond the surface of the canvas.

Loving Vincent is in cinemas from 2nd November through Madman Films.