Thor has always been the weird Avenger. Even in a team that includes smartarses in suits of armour, super soldiers, giant green rage monsters, the one that has a bow and arrow, and now a magician, Thor and his standalone films have always been the ones that everyone kind of glosses over. None of this is the fault of Chris Hemsworth who is perfect in the role, and Tom Hiddleston is still one of the few memorable Marvel villains. No, it’s the two mediocre solo films and the inability to figure out how seriously to take the source material that has always held it back. Not anymore. With everyone’s favourite Kiwi Taika Waititi in the director’s chair and an Olympic sized swimming pool’s worth of piss to take, this is finally the film that Thor and his fans deserve.

In case anyone missed Norse mythology 101: Ragnarok was Asgard’s version of armageddon, the foretold end of days when the halls of the eternal city burned to the ground with most of the Gods getting killed in the process. Set two years after the events of Age of Ultron, as Asgard stagnates with Loki as the imposter king, Thor has spent the last months travelling the cosmos trying to find out everything he can about the infinity stones. With his return and the death of his father Odin, in a role Anthony Hopkins has always seemed really bored in, Thor is confronted by the greatest threat that Asgard has yet faced – the return of Hela (Cate Blanchett), goddess of death. Stuck in a galactic gladiatorial ring ruled by the Grandmaster (Jeff Goldblum) and reunited with Mark Ruffalo’s hulk, Thor has to try and make his way back, to try and prevent the end of days. 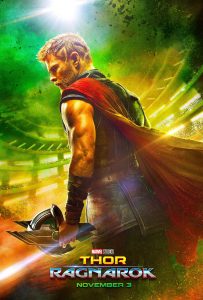 One of the ongoing criticisms of Marvel Studios has been the way that they seem to crush individualism. All the Marvel films seem very similar; even if a director comes in with a unique vision they usually get sanded down so they conform to the usual guidelines. Ragnarok marks the first time this doesn’t apply so directly – this comes off seemingly how Waititi intended it to. The many jokes are all Waititi’s really wonderful brand of silly humour and thankfully, unlike Dark World, this doesn’t take itself so damn seriously.

The result is like a giant party in which Flash Gordon, Stargate and The Lord of the Rings all drop acid together. The costumes look like they’re based off old Power Rangers episodes and the set design looks like a paint store got cluster bombed. Yet it all works perfectly – it embraces just how bonkers everything is and just runs with it, never slowing down and never being self conscious about it.

A lot seems improvised and contrary to the usual outcomes it’s all quite funny. Hemsworth and Ruffalo have excellent chemistry, and newcomer Tessa Thompson fits in perfectly. Blanchett leaves no piece of scenery unchewed and she’s clearly having the time of her life, making the most of an occasionally shallow character who is also the standout winner in the ongoing competition of Asgard’s most outlandish headwear. Jeff Goldblum just does what Jeff Goldblum does best – he’s really weird.

Marvel is yet to have a single out-and-out failure after seventeen films, and with Infinity War due next year (probably the most ambitious undertaking any studio has ever embarked upon) this is still a golden time to be a geek. At this stage Marvel know exactly what works and what their fans want; they’ve got it down to a T. If you go in looking for a very boisterous and very colourful adventure with characters we’ve all grown attached to after knowing them for upwards of six years then this succeeds totally. It’s the most fun you’ll have in a theatre in 2017.

Thor: Ragnarok is in cinemas from 26th October through Disney.