As one of his last feature roles before his death, John Hurt’s performance in That Good Night is a real case of ‘art imitates life’.  The film serves as a sort of homage to Hurt, generating a wistfulness in the knowledge that Hurt has since passed on.  Although it is not the greatest film ever, it is elevated by both Hurt’s presence and his loss.

John Hurt is Ralph Maitland, a successful and renowned screenwriter and author. He lives with his much younger and very tolerant wife Anna (Sofia Helin) in Portugal. She is devoted to Ralph despite his cantankerous nature.  Ralph is elderly and dying and it becomes clear that he has a few things he wishes to resolve, including a reconciliation of sorts with his estranged son Michael (Max Brown).

When Michael arrives at Ralph’s insistence, he has his girlfriend Cassie (Erin Richards) with him, a source of great disappointment to Ralph.  Ralph proceeds to insult Cassie repeatedly, who takes the abuse with good grace up to a point.  Cassie eventually responds to Ralph, retorting that his insults of her are really abuses of his son, a point which sees Ralph outwitted and on the losing foot.  His hopes of reconciliation with Michael may be ruined.  Meanwhile, Ralph has been entertaining another mysterious visitor, an ‘angel of death’ (Charles Dance) who he hopes will expedite his death. 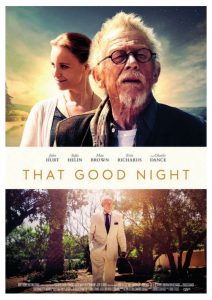 Directed by Eric Styles, That Good Night is visually gorgeous; the setting in Portugal is stunning and offers a gorgeous colour palette, sandy and warm.  But the soundtrack is incredibly problematic – it is far too saccharin for the nature of the subject matter.  Ralph is a difficult man, and he is also a terrible patient.  He has bad relationships with both his wife and son, and this tension should be felt.  The combination of the warm colours and the sweet music strips all tension away, leaving instead a sleepy and serene feel.

Hurt and Dance are great, between them they have some fabulous dialogue – conversations which are incredibly timely given the continued euthanasia debates in Australia and globally.  Hurt has some wonderful soliloquies, not surprising given this is adapted from a stage play, and Dance is his perfect counterpart.  Even the tone and metre of their voices are well matched.  Unfortunately the rest of the cast are a bit wanting.

Other characters are sorely underwritten – Anna and Cassie are interesting in their own right, but the film allows them little complexity. Deep pain is glossed over on the part of Anna, at the burden of her relationship with a sickly and belligerent older husband, and his denying her the children she apparently longs for.  Without giving Anna nuance and scope as a character, her devotion to Ralph is a little unconvincing.  Likewise, Cassie is given shallow treatment; she is painted as being whip-smart, with a PhD in sociology and a foot in the door with the prestigious end of the science community.  As the agent who is meant to be Ralph’s intellectual match and emotional superior, who brings about his embarrassment in front of his wife and son, she should be given more credibility. While the support cast are unconvincing, this is partly the fault of the soundtrack and score. It gives a false sense of relaxation and cheeriness, which too effectively counters the supposed tension.

Written By
Amy Taylor
More from Amy Taylor
The original release of 54 (1998) wasn’t actually all that memorable. Lots...
Read More