Not to recommend Wikipedia as a trustworthy source, but a quick search for ‘time loops’ will tell you that no less than five films using this same device are slated for release in 2017. Presumably this practice is subconsciously inspired by Hollywood’s well-chronicled struggle to escape its own loop of recycled mediocrity, but let’s not get too picky. Happy Death Day is not going to be the critical success that upends the status quo, but it is harmless fun and sometimes it’s just a relief to find a horror film that doesn’t splatter us with minced organs and jugular spray.

This is because the very next moment after sorority girl Tree Gelbman (Jessica Rothe) is killed by a madman in a cartoon baby mask, she is waking up next to an increasingly familiar post-party saliva pool. So what went wrong? One minute she is strolling through an underpass, the next she is reliving the same pounding headache and all-round good guy Carter (Israel Broussard) is still offering back her pants. It’s also her dreaded birthday, her Dad’s on the phone, there is a live affair with a professor that is never going to end well, and yes, the same psychopath is determined to ruin the party all over again unless she can get ahead of the curve. 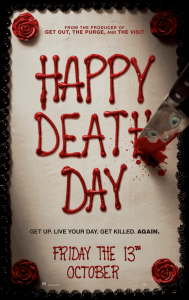 Groundhog Day mixed up with Scream is an appealing combo, and Happy Death Day takes much the same happy-go-stabby tone as you would expect of a rom-com slasher film. It is true the repeat timeline robs HDD of much of the suspense that a horror fan might like, though director Christopher Landon and screenwriter Scott Lobdell don’t seem to be aiming for that market. This is essentially well executed brainless fun, and I think everyone needs that every once in a while.

Cynically poking fun at the pitfalls of college life and knowingly signposting danger as subtly as a roadside Maccas, it’s easy to relax and take comfort in the certainty of Tree’s continual respawning. In less sure hands this gimmick may have grown tiresome, but Happy Death Day never seems to fall into a one-note screamfest and for this it owes Jessica Rothe a huge debt. As Tree begins to embrace her improbable fate with varying degrees of lunacy in the spirit of carpe diem, you can’t help but warm to Rothe’s trial-and-error performance. Cycling through the emotions, from distraught to gleeful and everything in between, she is essentially the only rounded human in a sea of cardboard cutouts, so it’s a credit to her that we are willing to stick with HDD to its inevitable conclusion.

All in all, HDD is a rather pointless addition to the canon, but even if time loops have been done to death, the whole point of regurgitating them seems to be the hope something good might still come of the premise. Arguably Landon and Lobdell’s contribution won’t make you feel smart for having enjoyed it, but if you’ve had fun, who’s to say it isn’t a resounding success?

Happy Death Day is in cinemas from 12th October through Universal Pictures.