Over film history, there have been a number of exceptional figures that have defined their nation’s cinema. There is something about them that screams a particular way of life, of a sensibility exclusive to the cultural life of a nation. Italy has Mastroianni. Britain has Connery, Mirren, O’Toole, Olivier, Knightley. Australia has Collette and Crowe (originally a New Zealander). America has Bacall, Bogart, Brando. And France has Bardot, Léaud, Belmondo.

Jean-Paul Belmondo’s filmic persona perfectly captured the dominant identity of French men in the ‘60s. Where Léaud often embodied the more modest, introspective qualities of intellectualised French culture, Belmondo shamelessly personified the arrogance, foolhardiness and pseudointellectualism of French masculine identity. Belmondo’s role as Michel Poiccard in Godard’s Breathless is clearly the definitive iteration of this. After all, Poiccard is a lowly criminal who thinks himself comparable to the great Humphrey Bogart.

The French New Wave film movement, of which Léaud and Belmondo were an integral part, was united around interrogating crises of male identity. Directors like Godard, Truffaut, and Chabrol didn’t undertake this task in the abstract: it was clear they were using film to evaluate and comprehend their own struggles and uncertainties. As a result, their films are serious cinematic explorations of the late 20th century milieu. 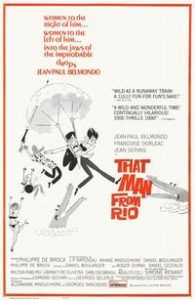 Philippe de Broca’s That Man from Rio smartly reshapes and ridicules the archetypal Belmondo character. Belmondo plays Adrien Dufourquet, a French military figure who takes an eight-day break from his job to visit his fiancée, Agnes (Françoise Dorléac). When Adrien unexpectedly turns up at her apartment, he lunges towards her in an ostensible fit of romantic energy. But we know he is trying to unsettle and show off to a tall, confident police officer (Daniel Ceccaldi). He is in the apartment to tell Agnes that a friend of her dead father, Professor Catalan (Jean Servais), has been abducted. Catalan is perhaps the only person still alive who knows the location of rare, valuable Amazonian treasure.

Soon after Adrien arrives, Agnes is also kidnapped by a group of thieves before his eyes. Adrien follows them on a stolen motorbike, still smoking a cigar he acquired in Agnes’ apartment. The chase takes him to the airport, where he unscrupulously, but hilariously, steals a veteran’s ticket to get onto the plane. To Adrien’s surprise, the plane takes them to the streets of Rio.

Adrien is determined to save Agnes from the grips of rapacious, greasy criminals. Unlike the Connery James Bond films of the ‘60s – in which Bond seamlessly and stylishly saves innocents and thwarts criminal and terroristic enterprises – Adrien inelegantly and incompetently searches for Agnes, with the help of a small but smart child, Sir Winston (Ubiracy de Oliveira). While the Bond films require our suspension of disbelief on account of Bond’s awe-inducing feats, That Man in Rio requires us to do the same because of Adrien’s clumsy ineptitude. It is certainly an anti-Bond film, and one that takes Belmondo’s screen presence to its extremes.

On the surface, That Man from Rio masquerades as an adventure and romance. But to any discerning eye, it is a raucously self-aware comedy that thrives in satirising lofty societal conceptions of male prowess and power. And from an entertainment perspective, That Man from Rio is a fast-paced whirlwind of fun.

That Man from Rio is screening at the Alliance Française Classic Film Festival from 12th to 15th October at the Astor Theatre.