If you want to write a film which explores a certain group of people it’s usually a very good idea to structure the story around a dinner party. There are so many avenues to explore: you can satirise people, explore relationships or even use it as a building block to some larger event. It’s an idea that many plays use and quite a few films are structured around (the one that immediate springs to mind is My Dinner with Andre). Jim Jarmusch used it in his neat little anthology film Coffee and Cigarettes and even The Dinner that was released only a few weeks ago has used this, both to differing degrees of success. Heck, even the most popular story ever told: the saga of Jesus, had a crucial set piece take place around a dinner table, even if the host had some rather strange ideas about proper dinner etiquette.

Puerto Rican director Miguel Arteta, working from a script by Mike White (aka Jack Black’s roommate from School of Rock) has added to the ever growing list of ‘dinner films’ with Beatriz at Dinner. Set in Los Angeles, Beatriz (Salma Hayek) is a holistic masseuse working for a pittance with love for all and an almost superhuman amount of empathy. One of her clients lives in the Hollywood hills, and after visiting her mansion to give her a massage before a dinner party Beatriz’s car won’t start. With no hope for a repair until the next day, Beatriz is invited to dinner with her wealthy client’s friends, a group of smug yuppies who make for some of the worst company imaginable. 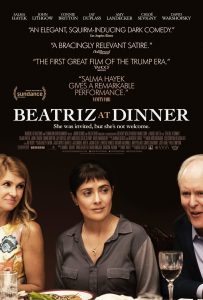 There are many parts of this film that work wonders. Salma Hayek is a wonderful presence and the satirical digs at rich white culture hit the bullseye. Many of these characters are cringe inducing; white women bitching about their yuppy problems is like nails on a chalkboard, and John Lithgow, who seems to be channeling Trump as a ruthless business man, has a face which is enticingly punchable from the moment he arrives on screen. The seldom seen Chloë Sevigny, who has been popping up a bit lately, is present and is always a welcome addition too.

Where the film really misfires is in the stark divide between dinner guests. The audience is meant to be on Beatriz’s side as she faces off against the spectacularly hateable dinner guests, but the film doesn’t realise that Beatriz is like the opposite side of the coin.  Put simply – Beatriz is annoying. She has the heart of a saint but she’s also that kind of new age alternative hippy which can annoy as much as the alternative. She’s very open minded, genuinely believes she has a spiritual connection with all living creatures and can heal with the power of her aura. These aren’t bad things but they can be very annoying for the literal minded among us. She probably likes homeopathy and reads Deepak Chopra.

This is a strange film. It has only the best of intentions and all performances are spot on, especially the nigh on ethereal presence of Hayek, but the bungling of the message and the annoying presence of almost every character really holds this back. The ending is kind of ridiculous when you think about it too, something about spirit goats.

It’s a likeable film, some parts work very well but others are frankly annoying without meaning to be. Nice, but you’ll be left wanting.

Beatriz at Dinner is in cinemas from 21st September through Roadshow Films.