As any pessimist will tell you, filmmakers will make movies about anything these days. And often announcements of film concepts are met with groans at the sheer awfulness of an idea. Many of us thought The Lego Movie would suck. But how wrong we were! One of the most hilarious movies in years, for both young and old, it surpassed all expectations, and the fact that it wasn’t nominated for an Oscar for Best Animated Feature is the biggest disgrace in Oscar history (according to this reviewer anyway). And so in 2017, when everyone told me The Emoji Movie would be bad, I naively thought: ‘But Patrick Stewart is poop! That’s genius! How can it go wrong?’ It turns out, very.

Trying very hard (and failing) to do an Inside Out, we are introduced to human, Alex (voiced by Jake T. Austin), and the emojis that live inside his phone in Textopolis. Alex is trying to impress his crush with the emoji that will sum his feelings up best, because of course who needs boring old words when you’ve got meaningless emojis? In Textopolis each emoji goes to work each day where they play out their role. The laughing emoji must laugh all day; the crying emoji must cry all day, etc. We meet Gene (T.J. Miller), the ‘Meh’ emoticon, who starts his first day on the job inside Alex’s phone. But he has a defect – he exhibits multiple emotions, and boss Smiler (Maya Rudolph), a psychopath who won’t stop smiling, sets the delete bots on to him. With the help of loner Hi-5 (James Corden), Gene seeks out hacker, Jailbreak (Anna Faris) to reprogram him. 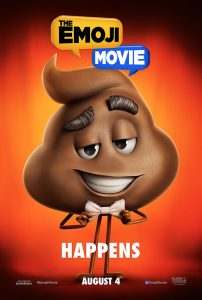 To be fair, it doesn’t even sound that bad. And the journey around the phone makes for some clever ideas – riding the waves on Spotify, creating picture perfect moments on Instagram, creating a path of escape through Just Dance, as well as literal internet trolls sitting around in the hackers’ area. But are kids even going to get these desperate attempts at humour? Do they use Spotify, Facebook, or even emojis? The only thing appealing for kids is a smattering of colour and sound, but ultimately it doesn’t appeal to either age group. The manic Just Dance sequence may even induce seizures in adults (and I’m not talking the good, Lego Movie type of manic. I’m talking the exhausting but ultimately unrewarding type).

It almost feels like the filmmakers (led by director and head screenwriter Tony Leondis) aren’t even that familiar with the concept they’re working with. I did not see one winky face, sticking out tongue face, or thumbs up emoji, and since when was the Hi-5 emoji suddenly never used? (Or regularly used in the first place?) In one scene, Hi-5 takes Gene to the losers area where all the un-used emojis hang out, including the eggplant. Ummm. Maybe that’s an adults only joke but LEMME ME TELL YOU, FILMMAKERS. THE EGGPLANT IS POPULAR. Learn emoji culture better.

In terms of the positives, I did laugh a few times (at jokes kids probably wouldn’t understand), and James Corden and Maya Rudolph are enjoyable in their voice roles. T.J. Miller and Anna Faris, in comparison, are rather unremarkable. The film’s message about embracing the different facets to our personalities isn’t bad, but it gets a bit lost amidst another worse message, that in order to win a girl you just need to find the right emoji.

Ultimately, The Emoji Movie just proves for the millionth time that no film studio measures up to Disney/Pixar. With advertising slogans including “It’s not easy being meh” and “[poop emoji] happens”, there are just too many easy jibes to make about this subpar film. Quite simply put, it’s a bit of a turd.

The Emoji Movie is in cinemas from 14th September through Sony Pictures.

Written By
Claire Robson
More from Claire Robson
Many will be familiar with Saroo Brierley’s story, having previously been covered some...
Read More