When you hear the words “white American rapper”, what come to mind?

Unless you’re still riding the Eminem train, it’s likely the thoughts that pop into your head aren’t particularly complimentary. Indeed, it’s the pervasiveness of negative stereotypes about this sub-culture that sets up Geremy Jasper’s feature length debut Patti Cake$ as a surprisingly profound, heart-warming and hilarious hit.

The film’s titular protagonist Patricia (a.k.a. Patti Cake$; a.k.a. Killa P) dreams of being a famous rapper. She has the talent to match her ambition, but is held back by her grandma’s healthcare debts, her heavy frame, and the fact that she’s never performed to anyone beside her friend Jheri (Siddharth Dhanajay) or recorded her own music. 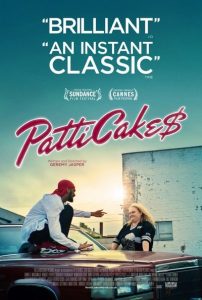 Early in the film, we see Patricia thrown into the deep end, forced to spit rhymes at her alpha-male peers in an 8 Mile-esque rap battle. Our hero not only stays afloat, but she drowns her opponent in a sea of insults, unexpectedly arising as the victor in their petrol station exchange. But what should be a satisfying moment for Patricia is instead a bittersweet moment; she is left lamenting at a diner about all the unpleasant things she said.

It’s this heart that will make Patti Cake$ more than just a film about hip hop or overcoming odds or even ambition. At its foundation, Patti Cake$ is a film about empathy and this is what makes it such an accessible and watchable film, even for those who aren’t usually fans of Patricia’s music taste.

Jasper likewise finds the hidden gems in each of his characters. This is no more evident than the journey he maps out for Patricia’s mother, Barb (Bridget Everett), whose selfish attitude makes her immediately unlikeable from her first appearance on screen. Nevertheless, she is the character worth paying most attention to.

While Patti Cake$ will warm soft hearts with its dramatic power, it will similarly delight audiences with its consistent laughs. Patricia and Jheri are an electric comic duo whose lyrical comradery is as potent as their friendship. The songs the pair write together, which Jasper wrote himself, are among the film’s funniest moments, and could even earn the film an Oscar nomination for Best Original Song. Regardless of what the Academy makes of Patricia and Jheri’s crass rhymes, don’t be surprised if the Patti Cake$ soundtrack charts well over the coming months, or if the multi-talented Jasper becomes a name to watch in the future.

Patti Cake$ is in cinemas from 14th September through 20th Century Fox.