Australian comedy can be a fickle beast. While plenty of brilliant television has been produced locally, feature films can be another matter. The best Australian cinema has to offer is usually seen in dramatic features, with The Rover, Predestination, and Holding the Man coming immediately to mind as some of this reviewers’ favourite films of their respective years. Comedies rarely make the same impact. Is it because there’s something just too awkward about seeing our ridiculous nature reflected back to us on the big screen? Or that it’s delivered better in thirty minute bites? It’s difficult to say.

Fortunately, every now and then you find a diamond in the rough. I can’t say I had high hopes going in to a local comedy, but I was pleasantly surprised. That’s Not Me boasts a dry, sardonic sense of humour, and while it isn’t exactly laugh out loud funny, it provokes more than a few nods of appreciation at what is essentially a relatable yet ridiculous story about following and also questioning your dreams.

Polly Cuthbert (Alice Foulcher) is trying to make it in the acting world. She envisions great success, with the film opening with her on the toilet practicing her Oscar speech. Offered a role as an albino on local soapie Summer Street (think an even worse version of Neighbours starring Andrew O’Keefe), she declines in pursuit of bigger dreams: a role on a new HBO drama starring opposite Jared Leto. Polly’s identical twin sister, Amy, is then offered the Summer Street role, which is shown in the film in all its magnificent, tragic glory. And as a result, Amy’s career takes off, while Polly flails with no acting work, making ends meet working at The Astor Theatre in St Kilda. As Amy’s profile builds, Polly is consistently mistaken for her sister, rubbing salt into the wound with each case of mistaken identity. The notion that one identical twin would be so successful while nobody wants a bar of the other (“she’s just got IT” muses their agent) is completely absurd but presented in such a serious fashion that it’s actually quite brilliant. 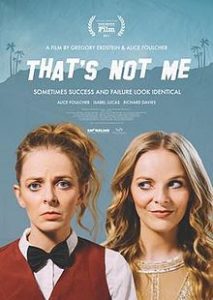 Gregory Erdstein directs his first feature film, co-writing the screenplay with leading lady (and also his wife) Alice Foulcher. The dialogue is delivered so dryly by Foulcher that it’s almost easy to miss some solid one-liners, the best of which is when Polly, after being told by an aspiring (and very wanky) director that he recently starred in a local film, states “I don’t really watch Australian films”.

Alice Foulcher is compellling in the leading role, and while we don’t see much of Amy, when we do she does stand apart and is believable as a separate person. She also manages to make Amy shine as a strong actress (and one who is stronger than Polly) within the film. Even as Polly, Foulcher straddles a fine line of being really quite unlikeable in some instances, and yet someone you can warm to in others. In supporting roles, Isabel Lucas as a semi-successful Aussie import making it in LA, Richard Davies as a fellow Summer Street actor and love interest of Amy’s, and Andrew S. Gilbert and Catherine Hill as Polly and Amy’s parents are all well cast.

Reportedly shot on a miniscule budget of $60,000, there’s something thoroughly enjoyable about the repeated, surely implausible tease that Jared Leto is going to turn up playing himself at any moment. The final film is vastly superior to what might be expected on such a budget, although it almost feels too short at 85 minutes. It’s surely a good sign, however, if a local comedic feature leaves you wanting more.

That’s Not Me is screening exclusively at Palace Cinemas from 7th September.