Watching The Lovers, the Rupert Holmes song Escape springs to mind – “Do you like piña coladas and getting caught in the rain?”  The notion that a marriage has gone stale, but in fact the two spouses are more compatible than they give each other credit, is endearing and made for a cute chart hit.  Like the song, the film seems to be striving for light and funny, but also wants depth.  Unfortunately the comparison is limited, as The Lovers seems confused with its own subject and tone.

Mary (Debra Winger) and Michael (Tracy Letts) have been married a long time.  Their marriage is well past its use by date and they are clearly struggling to even tolerate each other. They are also both having affairs.  Michael is enamoured with Lucy (Melora Walters), a tempestuous but alluring dance teacher.  Mary is adored by Robert (Aidan Gillen), a sullen but devoted writer.  Both Mary and Michael have promised their respective paramours that the marriage will be ended as soon as their son Joel (Tyler Ross) has visited with his new girlfriend Erin (Jessica Sula).  But that’s before Michael and Mary roll the wrong way in the night, and wake up nose to nose.  Seemingly from nowhere, their affections are rekindled and they embark on an affair, cheating on those with whom they are already cheating. 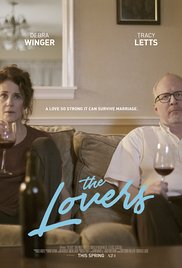 The film navigates some murky marital waters, but seems to remain lost. There are some funny moments, and poignant moments, but generally this film is disappointing. The Lovers seems to be trying to do and say something eloquent, but really just misses the mark.  The meditation on marriage and relationships seems to be looking for a position that can’t be found, erring between a non-judgemental whimsy and a more serious examination.

Both Mary and Michael are in boring, middle management jobs, living in a boring suburb, in a boring house. Although the initial appeal of both Lucy and Robert is evident, their attraction as longer term partners is in doubt.  The charm of the creative, passionate (younger) lover is clear, but Robert and Lucy are whiny, melodramatic and annoying, with Lucy’s tempestuousness  bordering on worrying.

The highlight of The Lovers is the excellent cast, who do their best with some questionable material.  Debra Winger and Tracy Letts are both fabulous, and their relationship is convincing – in both their barely concealed disdain, and their renewed warmth.  Walters and Gillen are excellent too, even though their characters seem to have been painted too overtly with neuroses.

Towards the end of the film, there is an excellent musical moment performed by Letts. This is a near perfect cinematic moment, and is clear and concise.  This moment is what the whole film seems to have been striving for, but is only captured in brevity.

The Lovers is in cinemas from 7th September through Sony Pictures.