The Hitman’s Bodyguard is what I like to call a collage of a movie. It’s a load of different pieces put together to form a whole, with parts that work and others that don’t. The assembler is someone who’s not got the touch of an artist, and it tells. Maybe they’re just starting to find their way, or maybe they’re just chucking stuff down to see if it sticks. The pieces are taken from all over the place; there are things that feel cheap and things that feel generic: things from better pieces of work, things that don’t seem to belong there, things that are somewhat inspired and things that are genuinely fun. It’s never going to be hung up as an example of high art, but it’s enough to give some pleasure.

The screenplay made Hollywood’s famous ‘Black List’ of best unproduced scripts in 2011, and by the end it feels unsurprising that The Hitman’s Bodyguard has been in development for so long. It’s got the locations, characters and clichés of a direct-to-streaming euro-thriller that could star JCVD or Steven Seagal (Assassins! Eastern European dictators! Interpol!), and so it feels like it only made it to the big screen because it somehow attracted big name actors. Ryan Reynolds stars as Michael Bryce – a former “Triple A Rated Protection Agent” with the motto of ‘boring is best’ – who finds himself having to guard a man he’s battled with in the past: the crazy, foul-mouthed assassin Darius Kincaid (Samuel L. Jackson). Together they must get to The Hague in time for Kincaid to testify against Vladislav Dukhovich (Gary Oldman, who could do this in his sleep), avoiding the Belarusian dictator’s henchmen along the way. 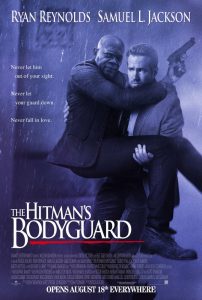 The movie gets by on the undeniable magnetism and chemistry of its odd-couple leads, even though neither is doing anything you haven’t seen before. Reynolds continues his smart/motor mouth routine, adds in a bit of the sad-sack/loser riff, and tops it off with the action skill he finally perfected in Deadpool. Samuel L Jackson, meanwhile, is Samuel L Jackson. It seems like they’ve said to him “Say ‘fuck’ and ‘motherfucker’ as much as you like and go from there.” He plays Kincaid as, of course, a crazy motherfucker, but also not without a heart and ultimate sense of justice at his centre. It feels fun though because, like his similarly expletive-spitting onscreen wife Salma Hayek, they’re having a laugh and can’t believe they’re getting paid to do it.

At its most basic premise, The Hitman’s Bodyguard has the potential to hit the mismatched buddy movie heights of Lethal Weapon, Midnight Run, 48 Hours or Hot Fuzz; in fact, Edgar Wright’s second film in ‘The Cornetto Trilogy’ should be a touchstone for this movie. But director Patrick Hughes (The Expendables 3) and writer Tom O’Connor are unable to twist genre clichés in exciting directions, to offer more than a couple of action scenes that don’t feel copied and pasted out of any generic action movie, or to make the most of settings that aren’t New York or LA. The locations are a particular missed opportunity. For some unknown reason a large stretch of the movie is set in Coventry in England. Did the local council pass on significant savings to the production to get them to film there? Why do the characters keep saying Coventry? Either way, if you’re going to set it there, at least do something like trying to play with the unusualness of having a Hollywood-style action movie set in the unassuming towns and countryside of England.

The quality also fluctuates throughout the movie, with the better parts highlighting the deficiency of the rest. It’ll start with really poor soundmixing and that clichéd-sounding ‘jaunty-action-comedy-movie music’, but then there’ll be one flashback that has really nice imagery and does more than any of the exposition dumps could, another that hits just the right note of comedy and graphic violence, or a close-up, improvisational fight that’s more entertaining than all the other action scenes put together. More of this and it could have really been on to something. But that fight also brings into focus the uncomfortable nature of the other action scenes. Even popcorn movies don’t exist in a bubble and it’s getting harder to mindlessly watch scenes where the cinematic public are constantly put in the path of indiscriminate gunfire, where vehicles are used as weapons, and where random explosions in the streets are shrugged off.

While The Hitman’s Bodyguard coasts along on the chemistry of its main stars and the interesting moments are outweighed by the things you’ve seen before, it’s enough fun to be worth a none-too-serious watch.

The Hitman’s Bodyguard is in cinemas from 31st March through Roadshow Films.