With so much content coming out every year about the Second World War it’s easy to become complacent with just how massive the years from 1937 to 1945 actually were. New films about Nazis or the Pacific theatre come out every year, and after beating the same drum for seventy years it’s rare that the passionate film and history buff can discover something totally new.

What a lovely surprise it is that Norwegian director Erik Poppe has made The King’s Choice, a superbly made and acted film about the often overlooked Scandinavian front. King Haakon VII of Norway had been on the throne for thirty-seven years when the war started, and over the next two years his actions changed the course of Norwegian history. This is a story of invasion, battle, coup d’etat and monarchy proving that real history will always usurp fantasy fiction as the more fascinating.

Jesper Christensen’s towering performance is the backbone of Poppe’s film, playing the ageing king with a pride that has been earned after a lifetime of duty in the public service. The film opens with a scene of him playing with his grandchildren in the ghostly white snow when his daughter comes over and informs him that the German army is beginning to mobilise. “Let’s not end up on the wrong side of this war” she says. The days and decisions that followed were probably the most important that had happened in the history of Norway.

The events covered will most likely be totally new to any viewer who isn’t Norwegian. Writing as a rabid history buff who studied this period at university, pretty much all that transpires was a totally new and fascinating discovery. The king and the crown prince (Anders Baasmo Christiansen) had to leave their family behind and go into hiding, trying to deal with the encroaching German juggernaut and Vidkun Quisling, a Nazi collaborator who orchestrated a coup hours after the first shots were fired. 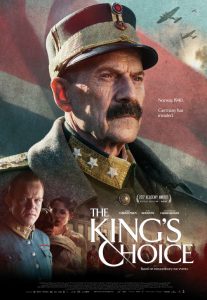 The King’s Choice has the kind of Scandinavian nostalgia that taps into memories of reading Hans Christian Anderson as a child. Norway has to be one of the most beautiful countries in the world and it has been magnificently shot by John Christian Rosenlund’s cinematography. Set design and costumes have the allure of old Europe, with its royal families and tradition. This is an incredibly well made film, from performances to editing it’s that beautiful ark of traditional and well-honed craft that Scandinavian film does so well.

Jesper Christensen is a veteran of European cinema – although English speaking viewers might know him as Mr White in the Craig era Bond films – whose performance here deserves every award it is nominated for. The entire film is based on him and his reputation. It must be a task for an actor to try and craft, then embody, a character whose whole person and prestige are one in the same, but Christensen nails it. The film simply wouldn’t work if Christensen’s level of performance wasn’t there.

For a film about how great the King of Norway and his loyal army handled a foreign invasion, it’s incredible to find that there isn’t a single hair of arrogance or jingoism. There’s a healthy vein of Norwegian patriotism and even monarchism but never a moment when the film crosses the line like many other nationalist films about war.

There are points where the film drags when it get bogged down in plot detail that didn’t need to be there. There’s one memorable but ill thought out moment when Wilhelm scream is used in the middle of a super serious battle, but on the whole this is Scandinavian filmmaking at its very best. There were six historical consultants listed in the credits so you know that this has been created with the utmost detail.

The King’s Choice has earned a record twelve nominations in the Norwegian film awards and was a hit at the local box office – it’s easy to see why. With the glory of both European and Scandinavian grandeur combined with Jesper Christensen’s towering performance, The King’s Choice is the kind of moving historical epic that both teaches and enthrals.

The King’s Choice is in cinemas from 24th August through Palace Films.