It doesn’t take long to get to know Barry Seal, the focus of American Made. Piloting regional flights for TWA Airlines, the family man is caught in a loop of the country’s regional airport lounges farewelling one lot of passengers and greeting the next, a job that Tom Cruise’s bleached teeth seem more than qualified for. But such a grimace is hardly as telling as the smirk that washes over his face as he wakes up his passengers by manufacturing some ‘turbulence’, the sole purpose being to allay his own boredom.

It’s this self-serving search for a thrill by the everyday American opportunist that makes an offer from CIA operative Monty Schafer (Domhnall Gleeson) hard to refuse and a no-brainer in more than one sense. On the one hand there’s the promise of money to sustain his wife (Sarah Wright) and family’s wellbeing. On the other hand is the rest that is on a need-to-know basis. He can’t afford to tell his wife where his newfound wealth comes from, let alone the fact he’s flying reconnaissance flights over Nicaragua in exchange for the authorities turning a blind eye to his cigar smuggling.

This union of the talents of director Doug Liman and Cruise after the highly entertaining Edge of Tomorrow is proving to be a successful one, and in American Made Cruise has the benefit of the best material he has had to work with for well over a decade, mostly thanks to Gary Spinelli’s upbeat screenplay that taps into an 80s spirit of adventure with the mischievous energy of a heist movie. It helps that Barry is a character of roughly the same intellect we might imagine Cruise to have himself. He’s charming but there is a distinct naivety that is surprisingly endearing for a cocaine smuggler. It may be tempting to write Cruise off as a franchise junkie past his time, but he still has chops when he is granted the chance to use them. 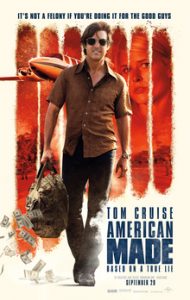 Liman is clearly a man of humour who like to poke fun at his heroes, a refreshing change for Cruise, whose characters have tended to be held on a pedestal. Like in Edge of Tomorrow, Cruise again plays a man out of his depth in a sea of escalating commitment. At a certain stage you just can’t turn back, and surely he knew what tenuous foundations he was teetering upon as he worked beneath the noses of Pablo Escobar, the Columbian Medellin cartel, the CIA and various other agency acronyms, not to mention the White House. Perhaps he was too concerned trying to find places to store all that money, one of the less obvious problems of working for a drug cartel.

It may be that Seal’s character is portrayed with a little too much sympathy for a trafficker of arms, drugs and people, with the viewer divided between a pragmatic objection to the whole enterprise and a strong will to see Seal’s family prosper. It does not appear to have been in Seal’s nature to consider what head- and heartache his cocaine trafficking was causing down the line, and his story speaks to the selective moral compass which allowed him to justify the adventure for so long. On the casting front it is also a shame that the considerable talent of Lola Kirke and Jayma Mays didn’t warrant more of an outlet in a star vehicle that largely runs in Cruise control.

Regardless, American Made is a cracking yarn, and its basis in fact (no doubt with some creative licence) is certainly not one designed to inspire confidence in our elected officials or security services. The source material of Liman’s film may make for a carefree companion to the Netflix production Narcos, but a closer comparison would be the Coen brothers’ Burn After Reading, which speaks to the stranger-than-fiction farce that became of a culture of rampant double-dealing. Given the fallout from this scandal at the time, it’s hard to say whether Seal’s adventure is one we can learn a lot of lessons from today, but the concluding words of that film seem more than apt for a similarly nonsensical turn of events: ‘I guess we learn not to do it again. I’m f***ed if I know what we did’.

American Made is in cinemas from 24th August through Universal Pictures.