In the thrilling Killing Ground, directed by Damien Power, we follow a brutal family camping trip which turns horribly wrong after horrific crime scene is discovered. Featuring an all star cast of Australian and New Zealand actors and actresses, Harriet Dyer and Ian Meadows lead the film as couple, Sam and Ian. They have to test the limits of their relationship, as survival is reliant on one another in order to escape murderers Chook (Aaron Glenane) and German (Aaron Pedersen). Making up the rest of the primary cast are Maya Strange, Tiarnie Coupland, and Julian Garner as the family found in the woods. 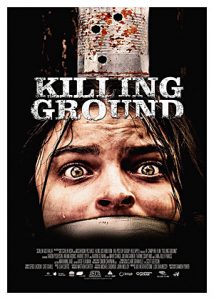 This relatively short film leaves viewers with many unanswered questions. The ending of the film is abrupt, and the scares could have been more dramatic for a thriller film. Instead they are obvious follow-out scenes from the characters. There could also have been more of a detailed back story in regards to the characters of the “hunters,” and why they have murderous intentions. This would have provided the audience with a detailed characterisation of the characters and the film would have flowed better. The time sequence involving the two families was also confusing, suggesting the story was not clear in the film’s screenplay. While background noises such as grasshoppers and foot steps provided the film with added sound effects to attract the audience’s attention, the music could have been more dramatic in order to scare viewers. Unfortunately, the only frightening aspects were the gory images displayed on screen.

The Killing Ground is in cinemas from 24th August.