Annabelle: Creation has one of the biggest shocks any horror could deliver. It’s a sequel (well, technically a prequel) better than the original. Creation is a great story that creates and immerses the viewer in a southern gothic mythos, regurgitating demonic themes and symbology. It’s equal parts jump scare and psychological terror. It has more in common with the quintessential possession story The Exorcist, than its source material, The 2014 lacklustre Annabelle, a spin off from James Wan‘s The Conjuring universe.

As horrors go, Creation is another step up in the excellent period of fright flicks that the last three years has thrown at us. As a 95kg horror aficionado, dolls and skeletons don’t really do it for me. But with a carefully crafted mythology and myriad of physical and metaphysical scares, this will be sure to affect even the most seasoned horror fans.

Australian actors Anthony LaPaglia and Miranda Otto  are Samuel and Ester Mullins, happy parents of seven-year-old Bee. They are the perfect Southern Christian family until it goes horribly wrong and Bee’s life is cut short. Twelve years later with Mrs Mullins permanently bed ridden, Mr Mullins is in a darker place then ever. Searching for solace he decides to take in a small group of orphaned girls, cared for by good-hearted nun, Sister Charlotte (Stephanie Sigman). Despite a dreary, gothic environment, things are mostly fine for everyone until  Janice (Talitha Bateman), one of the younger and more precocious orphans, enters the upstairs room Mr Mullins has kept strictly off limits. 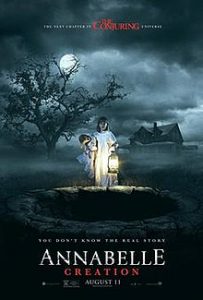 Right off the bat is some fantastic foreshadowing. Young Janice has a manageable case of polio requiring a walking aid. Her only way upstairs is with a beaten up staircase elevator that only works with the seatbelt buckled. Sister Charlotte’s room has a laundry shoot whose counter weights are worn and is prone to flying open. It’s these innocuous details that bubble in the subconscious when the jump scares begin.

The film’s near two hour running time whizzes past with a well-edited pace and engaging narrative. The characters are victims of circumstance out of their control. They make all the right choices in their world, which doubles down the fear factor. Those who weren’t too scared by the original or the Annabelle doll herself need not worry about leaving fright free. The doll is the least scary element in the film, and her on screen moments actually provide some great comedic relief. I’m not sure if this is a deliberate or ironic choice, but it works in total harmony with the film which would otherwise be non-stop adrenaline scares in the latter half.

Creation gets more bonus points for originality by subverting well established horror tropes. The power of faith, the nature of possession, and the innocence of youth are all ideas subverted and toyed with  by director David Sandberg. His understanding and appreciation of the genre shine through, delivering a thoroughly creepy, jumpy and entertaining scare. His 2013 short Lights Out won him plenty of acclaim and it’s with Annabelle Creation he manages to deliver to that high potential.

Annabelle: Creation is in cinemas from 10th August through Roadshow Films.

Written By
Ben Isbel
More from Ben Isbel
'Based on a true story' is the overused tagline usually reserved for...
Read More