Iraq, 2005. Two years after Bush the sequel stood in front of a banner that proudly declared ‘Mission Accomplished’, guerrilla warfare is still raging across a country that crumbled like a house of cards. In a microcosm of the escalating storm, a two man team of snipers (Aaron Taylor-Johnson and JOHN CENA cue epic meme music) are stationed near a pipeline construction site which contains an old stone wall. Their mission is to survey the area and see how and why everyone working there was shot.

“That wall is haunted” says Cena’s character in a line which soon proves prophetic. Pinned down at the mercy of an enemy sniper and continuously contacted by a strange voice which keeps talking to him over his radio, Taylor-Johnson’s Isaac has to try and keep alive behind the wall in the middle of a war zone, far from any help.

The Wall is the first film that Amazon Studios has made from a spec script (a non-commissioned screenplay written by a writer who does the equivalent of throw a bottle into the ocean and hope that someone will eventually find and read it). Director Doug Liman, whose track record includes the excellent Bourne Identity and Edge of Tomorrow, makes the most of Dwain Worrell’s decent but occasionally over egged script. What at first seems like just another American military jingoistic circle jerk eventually reveals itself to have a depth and sense of self awareness rarely seen in jarhead war films. 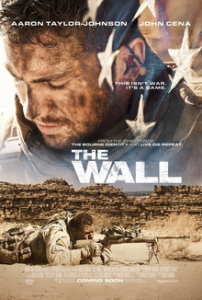 Aaron Taylor-Johnson is almost the only person that the audience spends time with over the slim 90 minute run time. In a filmography where he keeps flexing his acting talents alongside some fairly unremarkable films, he’s beginning to carve out a very interesting career for himself; he’s one to watch in the coming years. The casting of John Cena was an inspired choice on the part of Liman, who seems to be using Cena’s reputation as the ripened muscle man of WWE as a way to subvert the audience’s expectations of what the film is going to be. Surprisingly, Cena is actually really good in the role. He doesn’t have anything that strenuous to do (he spends most of the running time laying face down in the sand) but he’s totally believable as a soldier and manages to sell the role totally.

While Worrell’s script does have moments that are flat out silly – two snipers quoting poetry to each other comes to mind – there is a hidden depth here that comes as a welcome surprise. The subtext doesn’t descend very far; it’s little more than ‘one man’s terrorist is another man’s freedom fighter’ mixed in with a critique of the USA’s continued involvement in insurmountable wars they keep starting and not finishing. But all credit to Liman that it’s there. It’s a very fair point to make but we’ve been beating that drum for about 15 years now – 52 years if you count back to the escalation of Vietnam. It’s simply repeating a mantra that, although bearing a stark and complicated truth, isn’t original or revelatory anymore.

The Wall is in cinemas from 10th August through Roadshow Films.

Written By
Simon Storey
More from Simon Storey
Ever since Transformers arrived on cinema screens in 2007 the series has...
Read More