In 2006 Al Gore rocked the world with An Inconvenient Truth, a watershed moment when the concept and threat of global warming finally slotted itself into mainstream consciousness. Al Gore returns with another timely reminder which hits like a sledgehammer blow and needs to be seen by as many people as possible.

It’s been eleven years since this topic became a massive talking point, which in political terms is a lifetime. An anecdote Gore uses involves a waitress who recently looked at him and commented “You know, if you dyed your black you’d look just like Al Gore”. A lot has changed in that time, not all of it good. Suburbs of Miami are now inundated on a regular basis because of the high tides, huge sections of the ice caps are simply vanishing from the face of the earth, and Syria is going through it’s worst drought in 600 years. If one needed real examples of the problem facing us then the nightly news is a good place to start.

However, this documentary isn’t just another excuse to slap the audience in the face as a wake up call. The sequel is more of a reminder and an update on how this issue is progressing, which once again, isn’t all good. Apathy seems to be the word, a sort of common acceptance that this issue is getting worse and governments don’t have the ability to make any lasting change because of a largely hijacked democracy. 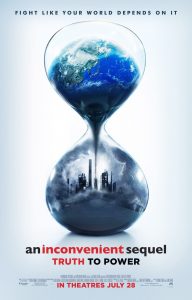 Maybe the best thing about Gore’s film is not only the new and striking case that it argues but a reminder of how to process it. We’re reminded that “Despair can be paralysing”, and when dealing with this topic it’s often difficult to feel anything other than hopelessness and despair. Gore is effectively trying to push the audience back on track. It’s easy to feel like the fight is going nowhere but it’s still one that needs to be fought with every bit of effort that can be mustered. There are solutions. This can still be won.

This might be the most aggravating thing about the topic – which is admittedly one of the most complicated challenges imaginable – that we have multiple solutions and know how to fix it but are unable to work together to actually follow through.

However, as positive as the message is, there’s one unavoidable caveat that hangs over the film like a rather ominous raincloud. The entire second half is devoted to the Paris Climate Agreement from April 2016, the set piece which the documentary is building towards and seems like the climax which is meant to leave the audience with a sense of hope. This whole section plays out like some bizarre tragedy where those watching know a key piece of information the filmmakers couldn’t have predicted. As Mike Tyson once said, which Gore quotes upon hearing the news: “Everyone has a plan until they get punched in the face”. The election of Trump clearly came as a massive surprise to the filmmakers, as it did to 99% of us, and this changes the entire course of the documentary. Trump pulling out of the Paris Agreement is only mentioned in a text dump before the credits. How does all this play out now? No one knows, but it will be one of the most important things to monitor.

Although it’s not as revelatory or as immediately rousing as last time, there’s unlikely to be a more important film released in 2017. As we’re reminded in the closing moments, when it comes to this topic we need to fight like our world depends on it – because, after all, it does.

An Inconvenient Sequel is in cinemas from 10th August through Paramount Pictures.

Written By
Simon Storey
More from Simon Storey
If you've never heard of Clark Terry before here’s the overview; he was born...
Read More