When Steve Coogan suggests, (I’m)”Not up-and-coming. I’ve arrived“, it’s all very amusing. This is about himself as the fictional character he plays in Michael Winterbottom‘s latest installment of The Trip. In this case, The Trip to Spain. Coogan joins the familiar ‘family’ man, Rob Brydon, and in the same scenario a phone call is made, a location is suggested, and there is another adventure filled with bickering and eating. It’s all that easy.

The film features romanticised scenery just like in the other two trips to England and Italy. One quickly realises, however, that it doesn’t matter what the location is, because in no time the boys will find a way to break out an impersonation. And they keep coming. The locally sautéed goodness is shovelled down their throats as do many scenes that feel like being stuck on the kids table. Revisiting previous Michael Caine gags, this time Marlon Brando, Roger Moore and Mick Jagger, amongst others get a serve.

But The Trip to Spain is fresher and has new laughs to get excited about. While it does use the same formula – it’s about food/culture, tangents of existential crisis, and a few sexual flings (the latter not apparent this time) – it has progressed. The Trip to Spain‘s vague conclusion/statement makes you want answers but also makes you happy to be left without knowing if this is the final one. It has really done itself justice to the characters and their self healing adventures. 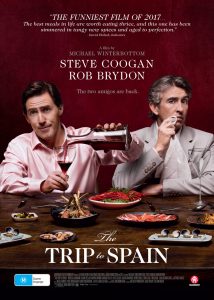 What makes another trip tolerable is the charm of Coogan and Brydon. The comedy lies in their differences and their ability to make a mockery of the situation and themselves. Personality wise, Brydon is the content and welcoming one. Coogan is clearly ego driven. He expresses himself as the more serious actor on the brink of something big, but really Coogan can’t shake of his post Philomena success.

Winterbottom makes you feel a part of the actor’s journey in self discovery and authenticity. Bringing this ‘authentic’ self in front of the camera makes this a personal but meta experience. There is also loads of enjoyment to get from the acting. You have to commend Coogan and Brydon for the way we are lead to believe that these fictional characters are themselves. It’s an absurd mirage to think it is not real but in fact acted.

The Trip to Spain may not be for everyone’s tastes. You really have to be familiar with Coogan and Brydon’s work, or see an art to being an impressionist/impersonator.

As a whole, The Trip to Spain is more of a collection of stories/jokes and observations depending on what you can connect with. Some work better than others. Impressions that I had no connection with wore thin and felt tedious and boring. Almost waiting for that joke to be over, you know that it could turn any second. When you are in on the joke, and get it, that’s a different story. That’s when The Trip to Spain is a supercharged lesson in comic genius.

The Trip to Spain is in cinemas from 3rd August through Madman Films.