It’s often argued the best way to deal with dark subject matter is with humour. And so it is apt that Finnish auteur Aki Kaurismaki turns his dark comedic lens on the refugee immigration into Europe.

There are two focal characters in this story, Wikstrom (Sakari Kuosmanen) and Khaled (Sherwan Haji), though the two do not meet until the middle of the film. Both are men of few words with a propensity for smoking. We are introduced to Wikstrom as he wordlessly removes his wedding ring, leaving it on the table in front of his inebriated wife, walking out the door. After cleaning out in a shady game of high stakes poker he spends his winnings on a restaurant business, keeping on the business’ three staff, all of whom are character portraits of apathy.

The other central character within the film is Syrian refugee Khaled. The constant tobacco he inhales seems to smother his emotions. The exception is concerning his sister, becoming animate and desperate concerning her whereabouts. After escaping war torn Aleppo together after their family’s death, they lose each other physically near Romania. His arrival in Finland is a fluke after escaping racist thugs within a coal ship. Other than integrating within Finnish society his main goal is a reunion with her. 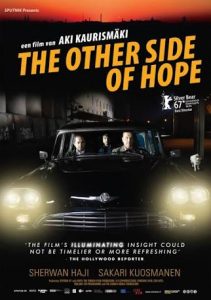 The film is blatantly political. The characters are warmly human and filled with acerbic wit. The deadpan humour softens the emotional punches. I’m not sure if this is a positive or not; at times it feels like a Coen Bros film with the intelligent straight-laced humor. The glimpses of emotional outpouring, in particular in Sherwan’s performance, will move viewers.

Not unlike Superman, the film’s greatest strength is also its biggest weakness. The uncomplicated manner in which Kaurismaki presents the subject matter is clever, allowing the viewer to take away what they want. But it also leaves you wanting more from the film. After an otherwise enjoyable 100 minute ride it feels like the film ends without really saying anything regarding its weighty themes.

Another positive to the film is the music. Punctuating the film are ballads reflecting the existential crisis the characters are going through. The bare aesthetics and still photography of the film harken back to the early Hollywood era.

The film is many things but to settle with one adjective, laconic. That brevity is best exemplified when Wikstrom and Khaled’s worlds collide. Without sentimental and sappy words the two seem to innately understand each other. Wikstrom’s generosity and Khaled’s resilience are each admirable and moving. The film has an agenda, but by pursuing it  with all the cards on the table and plenty of humour this is a film anyone can enjoy.

The Other Side of Hope screens as part of the Scandinavian Film Festival from 13th July to 2nd August.

Written By
Ben Isbel
More from Ben Isbel
John Krasinski’s star is on the rise in the land of Tinseltown....
Read More