Magnus Carlsen is a Norwegian Chess player of formidable prowess, a former child prodigy and now  young adult. Magnus, by director Benjamin Ree, takes place in 2013 in the midst of the most important match of his life, in which he has the chance to become world champion and fulfil his potential.

Like most Australians I’m sure I’m not alone in confessing my knowledge of the ancient game extends to family rivalry and the limited differences between the wizard and muggle versions. The documentary does a good job at explaining all the hoo ha about what makes the game so intoxicating to so many people. It’s hard not to get swept into enthusiasm as a young Magnus explains that after four moves the game has literally billions of possibilities. In his own words it is a game easy to learn and impossible to master.

There is plenty of home footage of the prodigy, and much of the film is spent exploring his journey as an introverted child genius.  At age five Magnus not only memorises every country, but also the corresponding flag, capital city and population. His father decides his unique learning style would be well suited to chess. Beyond his impressive mental capabilities little is revealed of his life outside chess. Evidenced on screen is some stunted emotional intelligence and a problem with bullies. The question of whether or not he is a savant is never raised, however. 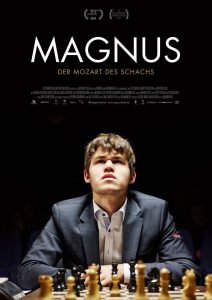 Beyond a propensity to cover his face with his hands when frustrated, Marcus reveals little about himself, stating it is much easier for him to go without sharing his emotions than opening up. That insight is itself as deep as we get into the mind of the man dubbed the ‘Mozart of Chess’. It’s somewhat disappointing that the filmmakers couldn’t go deeper. One by product of not having much one-on-one with the star of the show is an extended dialogue with his family who accompany the young man to most of his tournaments. It’s not the focal point but it is rather heartwarming how close and supportive the bond is within the small Norwegian family, particularly between Marcus and his father, whom he seems to have inherited his humility and humbleness from.

The final third act of the documentary goes back to the film’s opening sequence, Magnus’ match against five time reigning world champion Viswanathan Anand. The build-up and pre-game interviews are the most interesting moments of the documentary and the match is really framed as a good guy/bad guy affair with unfair advantages. Much is said of Anand’s use of computers and his group of grandmaster coaches, but it seems to be an unfair construct by the filmmakers to frame the battle as good/bad. When it comes to the actual game time the documentary cools somewhat. Without being a champion player it’s hard to look at the board and determine who is in front.

For the most part Magnus is an enjoyable biographical documentary on a reculsive Scandinavian former child prodigy. His genuine introvertedness and eagerness to avoid both press and the camera combined with his strong set facial features and athletic build make him a likeable star. It’s easy to see why he’s set the chess world on fire. Paradoxically the film itself isn’t as interesting as the subject matter, cruising in the one gear throughout the entire production and never quite allowing viewers to peer behind the curtain at the interesting young genius.

Magnus is screening as part of the Scandinavian Film Festival from 13th July to 2nd August.

Written By
Ben Isbel
More from Ben Isbel
With a decent hiatus between innings it’s with great anticipation audiences were...
Read More