It Comes at Night doesn’t start off like most horror films, which is an indication straight off the bat that it’s not going to be a traditional horror. From the opening we’re hit in the face with the intensity of a chilling death, with little context provided as to the who, where, when and why. After this it mellows out for some time, and some viewers may even wonder when the real horror is going to start.

After saying their teary goodbyes, a sick old man (David Pendleton) is put to death and buried by his family. Living in a desolate house in the woods, little information is provided as to how Paul (Joel Edgerton), Sarah (Carmen Ejogo) and son Travis (Kelvin Harrison Jr.) ended up here and what exactly they’re hiding from. Soon after, an intruder, Will (Christopher Abbott) arrives, claiming he is seeking refuge for himself and his wife, Kim (Riley Keough) and son, Andrew (Griffin Robert Faulkner). Hesitant but eager to bargain for the possibility of food, Paul lets Will and his family join them, and together they hide away from the rest of the world. 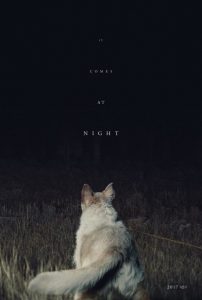 Relative newcomer Trey Edward Shults directs, writes, and co-edits his second feature film, following his 2015 debut, Krisha. He cleverly structures the film in a way that leaves viewers guessing, omitting certain scenes, causing viewers to wonder if they’ve missed anything significant that may belie a twist. But if you’re hoping for an ending in the style of M. Night Shyamalan, you may be disappointed (but maybe also lift your standards; the guy hasn’t made a decent film in years).

Seventeen-year-old Travis is at the centre of the film; he’s plagued by nightmares that make both him and the viewer question what there is to be afraid of. Kelvin Harrison Jr. captures both the subtle nuances in Travis’ reactions to more ordinary events, and the moments of genuine fear and confusion. And while we mostly see events through his eyes, we don’t always see what he sees. Special mention should also definitely be made of Joel Edgerton who continues to prove himself as a force to be reckoned with in Hollywood.

In a way, it feels like not much happens for much of the film’s 91-minute running time. However, that’s not to say it drags; it’s interested more in lingering over characters as their fear and suspicion grows, than to fill the run time with scares. A look at the time with twenty minutes to go had this reviewer convinced that SHIT WAS ABOUT TO GET REAL. But while the drama escalates, it’s not in the sense that many horror fans may anticipate or even hope for. That some may go away disappointed as a result is a shame because there is much to be valued in the underlying themes at play, namely fear and humanity. Bolstered by a creepy as heck score by Brian McOmber and some stunning cinematography by Drew Daniels, It Comes at Night may not be the horror you’re expecting, but its unique take on the horror genre provides food for thought.

It Comes at Night is in cinemas from 6th July through Roadshow Films.