Lady Macbeth is a minimal film, visually stripped of any lavishness or decadence.  The visuals reflect the thematic; it is severe and devoid of extravagance.  Set in 1865, a young woman, Catherine (Florence Pugh), is married to Alexander (Paul Hilton).  She moves into his father’s home, a claustrophobic and austere manor on a moor-surrounded estate.  Alexander is cruel, his father Boris (Christopher Fairbank) even more so.  Catherine is house-bound, sexually rejected by her husband and subsequently chastised by her father-in-law for her failure to produce an heir.  When both men are called away on business, Catherine is left on her own. Her maid Anna (Naomi Ackie) is her only company, but also a spy of sorts for the master of the house.

When Anna is captured by grounds staff, hoisted naked and screaming in an outhouse, Catherine appears to her aid. Catherine thus encounters Sebastian (Cosmo Jarvis), a rough and primal figure who arouses her interest.  Subsequently they embark on an affair, a dangerous endeavor for them both.  When Boris returns and locks Sebastian away as punishment, Catherine poisons Boris in order to spare Sebastian.  In doing so she sets in motion a treacherous and fatal chain of events. 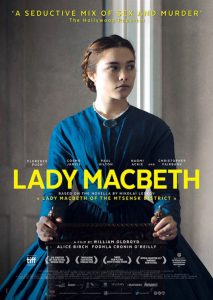 The film is based on the novel ‘Lady Macbeth of the Mtsensk District’ by Nikolai Leskov, which in turn is based on Shakespeare’s play, Macbeth.  The title of the film is an obvious reference, and although it is not a strict adaptation of either of the preceding texts, the film does take various cues from the original play.  Like the play, the film is set in Scotland, a remote estate with few links to the rest of the world.  The ‘lady of the house’ is, like the play’s Lady Macbeth, ambitious and murderously so.  Catherine is initially presented as naïve, unprepared for the restrictions and severity she has married into.  Her husband and father-in-law are cruel, and her evolution to murderess and agent provocateur seem justified.  But perhaps this naivety is a misdirection, as her actions begin to come more and more naturally.  Shakespeare’s Lady Macbeth gradually descends into madness, taking her own life.  Catherine ascends to power, with few of the ultimate weaknesses of the films’ namesake.

Lady Macbeth is beautifully captured by Australian cinematographer Ari Wegner; it is unadulterated and serious.  Interiors are claustrophobic, close shots which resist giving the viewer a sense of the real space of the house.  Exteriors are equally tight, with few long or wide shots and therefore no revelation of the landscape.  There is very little sense of spatial navigation, the shots all deliberately restrictive.  This is excellent as a means of initially garnering sympathy for Catherine, and thus a justification for her early actions.  It also then reinforces the sense of madness as events further unfold.

Despite the period setting, the film draws cues from noir-ish thrillers. In many ways it is reminiscent of the likes of Double Indemnity (both the film and novel); a dangerous wife, manipulating her lover to the detriment of her cuckolded husband. But also it has a Scandinavian atmosphere, bleak and dark, a limited colour palette and seemingly limited daylight.  Although there is nothing uplifting about Lady Macbeth, it is a beautiful and challenging film.

Lady Macbeth is in cinemas from 29th June through Sharmill Films.