Following the events of the last two films, transformers are now outlawed and hunted down by the government. Optimus Prime (voiced by Peter Cullen) is adrift in the cosmos after going AWOL and the few Autobots left are hiding out in the middle of the desert with the absurdly named Cade Yeager (Mark Wahlberg). It’s when Cade is summoned to England by Anthony Hopkins (Yes. Anthony Hopkins is staring in Transformers now. God help us all.) that he finds out that the earth’s salvation lies in finding a staff that once belonged to King Arthur. It was given to him by an ancient group of transformers and has the power to stop an ancient machine from being activated and may even be able to rebuild Cybertron: the transformers’ home world. 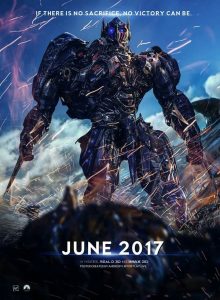 There are plot holes so large they generate their own gravitation fields, and dialogue so cringe inducing that it’s quite impressive the actors were able to deliver it. Everything from the set design to the soundtrack is turned up to eleven and the whole project is infused with Michael Bay’s teenage sensibilities and his inability to keep the camera still for longer than five seconds. The series isn’t even trying to take itself seriously or respectfully anymore; it exists solely because they make obscene amounts of money at the box office every time a new one comes out. Quality doesn’t seem to even be a goal any more.

But if you’re reading this, you already knew all of that. No one goes into the new Transformers film looking for plot, character or common sense. They go to see them for robot fistycuffs, explosions and flashy cars. Although, in this case, we can also bare witness to Sir Anthony Hopkins clearly having the time of his life.  You’re meant to leave your thinking faculties at the door and spend the entire 150 minute running time slurping down soft drinks and stuffing oversized buckets of popcorn into your mouth.

There’s no reason to be coy – Transformers: The Last Knight is a genuinely terrible film. But to expect quality from a Michael Bay project is being either overly optimistic or  one of those jerks who goes into films looking for something to complain about.

What more needs be said; if you liked the other Transformers films, you’ll like this one. It’s a terrible shame that mass entertainment has been broken down into the most shallow and chaotic film series currently on the market, but considering people always go and see them, the general public are certain reaping what they sowed.

Transformers: The Last Knight is in cinemas 22nd June through Paramount Pictures.

Written By
Simon Storey
More from Simon Storey
If you were ever a child, chances are you were closely acquainted...
Read More