Even if you’re not a fan of Formula 1, it’s very likely that the name ‘McLaren’ is instantly recognisable simply by osmosis. Apart from Ferrari it’s easily the best known name in the racing world, which is an astonishing feat considering that the McLaren Automotive company was started by one ambitious Kiwi who learned about cars by tinkering with them in his parents’ service station. Roger Donaldson, the Australian born director with a remarkable list of films on his CV, has taken the helm of his long percolating documentary about Bruce McLaren, travelling the journey from his beginnings racing locally in New Zealand to later taking on the Formula One circuit in Europe where he won the Monaco Grand Prix in 1962.

Everyone who was close to McLaren seems to have been interviewed. His mother, wife, friends and those who worked in his workshop all contribute, with a unified agreement that Bruce was a gentleman, whose life was cut far too short; McLaren faced his untimely death on the practice track at the age of 32. Combined with a considerable amount of archival footage and a few recreations, this is an undeniably well made documentary but ultimately, only for those already fans of McLaren or Formula One. 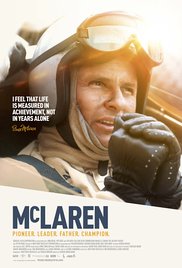 It’s undeniable that Donaldson and his team have done a considerable amount of research and gathered together a great collection of interviewees, but this isn’t enough to paper over the sad fact that McLaren is a crushingly dull experience. For a film about racing cars and Formula One in one of the golden ages of the sport, it’s incredible that Donaldson’s film is devoid of thrills and lacking in any excitement. Bruce McLaren seems like a perfectly nice man going by the many interviews of those who knew him but there is practically nothing surprising or inspiring in this tale.

It’s tempting to excuse this by pointing out that a special interest documentary is meant primarily to those already initiated. It certainly isn’t made with the critics in mind, especially those like myself; who aren’t familiar or overly interested in racing cars and Formula One.

However, this point is immediately countered with the presence of Rush and, more to the point, Asif Kapadia’s incredible documentary about Ayrton Senna – a film about a man I had never even heard of prior to watching, which ended up being my favourite film of 2010. A good documentary is one that can excite and entertain anyone, not just those already familiar with the topic, which is the greatest flaw that McLaren has come up against.

Formula One fans and Kiwis looking for an insight into one of the great companies they can lay claim to having birthed are advised to check McLaren out. For everyone else, it’s unfortunate that there is essentially nothing else to recommend here.

McLaren is in cinemas for a limited release on 21st, 24th and 25th June through Transmission Films.