Written and directed by one of Britain’s most acclaimed directors, A Quiet Passion sees Terence Davies return by bringing the life of none other than Emily Dickinson to our screens.

Beginning in the USA during the mid 1800s, a decade or two before the Civil War, Emily is one of three children in a very well-to-do Massachusetts family. Played by Emma Bell as a young woman and later by Sex and the City’s Cynthia Nixon, her life and works are brought to the screen from her youthful optimism to her death from Bright’s disease in 1886.

Considered to the greatest poet that the USA has ever birthed, with the exception of Walt Whitman, Emily Dickinson is one of those names that everyone knows but hardly anyone has read. There would be few people who could do justice to her life and legacy but Davies seems like a just choice. His debut feature Distant Voices, Still Lives is widely considered to be one of the greatest British films ever made and since then he’s cemented his name as the master of British realist drama.

A Quiet Passion is the film’s name but could also be read as its mission statement. This is a very quiet film yet also one brimming with feeling, including a subtle but fierce pride in its feminist themes. It’s a very stagey work, presented with the utmost pomp and circumstance that usually lies at the heart of period dramas – long takes with everyone talking in long-winded sentences with a lot of adjectives. Colours are left dim and the takes are patient; cinematographer Florian Hoffmeister only moves the camera when it is absolutely necessary. 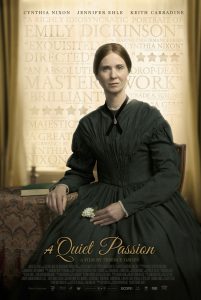 Adjusting to the film’s very slow nature and the precise dialogue takes a bit of getting used to; the first few scenes can be quite jarring with the very staged and showy dialogue which at first seems pretentious. Anyone who loses patience with ‘kitchen sink’ dramas is advised to stay away, for this is a film which includes a very deep and serious argument about the use of semi-colons.

The strengths of Davies’ film lie in the mise-en-scène (in less wanky film school jargon – the way all the props and costumes are presented). Each frame of this incredibly well made film looks considered; the structure and order of every image belies the immense care that Davies and his crew have obviously put into this project. The costumes by Catherine Marchand along with Merijn Sep‘s production design are incredible, bringing this period to life with an eye for the tiny details.

Cynthia Nixon is the vanguard of the film’s array of great performances. For her reputation as Miranda from Sex and the City it’s so refreshing to see her demonstrate her talent, for it’s a performance worthy of awards. Jennifer Ehle  (from the original BBC series Pride and Prejudice) as Emily’s sister, and Keith Carradine as her father are amazing as well.

While this is not going to be for everyone – the cinematic community will appreciate it but the average movie goer will likely be bored – Terence Davies had crafted a beautiful film about a subject he is clearly passionate about. Scenes of Dickinson’s poetry being read over his beautiful film will make anyone uninitiated appreciate her stunning talent with words. Two artists, Dickinson’s poetry and Davies’ filmmaking are an excellent match, bringing to the fore the best aspects of each other’s work.

A Quiet Passion is in cinemas from 22nd June through Palace Films.

Written By
Simon Storey
More from Simon Storey
In this day and age with significant amounts of people turning away...
Read More