Sometimes it’s more important that a story is being told at all, than how it’s actually told. We should be searching for truth in the stories we tell – whether that be factual or emotional truth – especially at a time when much of the world seems to be turning its back on it. Alternative facts, rejection of experts – honesty is being dismissed as inconvenient.

Truth is often one of the first victims of authoritarian regimes, and Turkey’s latest government is typical of this. They’ve promised to literally ‘correct’ the history books and restore the country’s true ‘glorious’ past. One event they seek to ‘fix’ is the forced relocation of Armenians from Turkish territory at the outbreak of the First World War. This move was actually a cover for the systematic genocide of a population they considered cancerous to their society. To this day, the Turkish government refuses to acknowledge the crime.

There’s a clear objective to The Promise, wholly funded by the late Armenian–American billionaire and former MGM owner Kirk Kerkorian – keep that truth alive. There are few directors better equipped to handle such sensitive historical material than Terry George, the Oscar winner whose work has long centred around ‘The Troubles’ in Northern Ireland (In the Name of the Father), as well as tackling the Rwandan genocide (Hotel Rwanda). George concentrates his film around a love story between two Armenians and an American, and around the performances of two excellent actors – Oscar Isaac and Christian Bale. 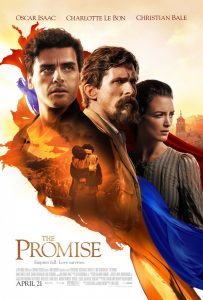 Isaac plays Mikael, an earnest small town apothecary who moves to Istanbul to pursue his dream of becoming a doctor. There he falls for Ana (Charlotte Le Bon), tutor to his uncle’s daughters. But Ana is in a fractious relationship with Chris (Bale), an American reporter that becomes the only source of outside truth when the ‘relocation’ begins. When Mikael’s medical exemption from the military is refused he must try to escape and return to his family, while Ana and Chris look for a way out of the country. The strained strands of love between these three pulls them together and apart across the background of the tragic events.

Isaac is unsurprisingly excellent, but Bale’s is a more complex, volatile and interesting character. But the film rests on Isaac’s shoulders, and where it does work, it couldn’t do so without him. His performance often pulls the film back when it tips over into dangerous, almost cheesy, territory or lapses into cliche and melodrama. The fault here lies in a script wholly lacking in self-awareness, with lines like “our revenge will be to live!” and a wound cleaning scene that obviously leads to much more. Isaac is a great actor, but not enough to magic up any sort of chemistry with Le Bon – not the best for a supposed romance.

George concocts a number of beautiful, striking and haunting images, but the film doesn’t have the emotional impact that a subject of this magnitude should. While the decision to soften this desperate story around a love triangle is understandable, what it merely does is pull the film in two different directions, only succeeding in going neither. It’s like focusing on Oskar and his wife in Schindler’s List. The scope is too narrow and there’s no context given to the circumstances. Still, despite a somewhat saccharin, soapy feel, there are many likeable things about the earnest The Promise, much like its main character. But there are surely many more, better films to be made about this overlooked period.

The Promise is in cinemas from 15th June through Entertainment One.

Written By
David Nagle
More from David Nagle
My feelings towards Silicon Valley change greatly not only from episode to episode,...
Read More