Benny Boom (Next Day Air, 48 Hours to Live), directs an all star cast in All Eyez on Me, delivering an exceptional film about the life of rapper, actor, and activist Tupac Shakur (played by  the talented Demetrius Shipp Jr.). The film features elements of hip-hop music and provides behind the scenes analysis deciphering the hidden messages behind Tupac’s lyrics, including controversial songs such as ‘Brenda’s got a baby.’

‘Thug life’ has never been a more accurate summary as the film depicts Tupac’s struggle from early days in New York, emerging on the stage, to selling platinum records and charting number one hits, until his tragic death, at the age of twenty-five. Tupac’s empowering speeches on issues surrounding race, with him being described as a revolutionist and an influential hero, adds to his success in informing white America of the harshness and grim consequences that individuals faced because of race-related issues. 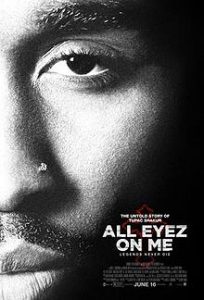 The film displays Tupac’s rawness as his powerful music portrays America as ‘the biggest gang there is’. Themes that play a crucial role in representing Tupac’s life, include friendship and how famous artists strengthen their ties to each other by looking after each other, especially in the music industry. More so, the film just as much states that if you wrong the people who look after you there will be consequences as well. Dominic L. Santana stars as Suge Knight, who manages Tupac’s music success, and Jamal Woolard plays rap legend Biggie Smalls. Not only do the actors mimic famous rappers’ personalities, but they also look a lot like what the original all star legends did. Tupac also states during the film, “If they kill me, I want the people to have every drop, to know the real story”.

All Eyez On Me illustrates that music is something more and that it speaks to people in various ways. One of these concepts which Tupac marks in his music is that of struggles and gang communities. Tupac reminds his viewers, “A shooting can happen anytime and anywhere”. Just as some are proud of his success, there are people who are jealous and would do anything to eliminate Tupac from the competition. The film reminds viewers of how some individuals were out to ruin Tupac’s image and that he was constantly reminded of the “bullseye on his back” because of race.

The media focusing on Tupac’s private life and the American Vice President disagreeing with what Tupac wanted his music to represent, provided Tupac with “all the tools to destroy himself”. This is a must-see film which documents the talented cultural icon whose legacy continues to grow long after his passing.

All Eyez On Me is in cinemas from 15th June through Roadshow Films.