Written at the mid-point of his career Twelfth Night (or, What you Will) is arguably the standout best comedy that Shakespeare ever wrote. Adapted by Simon Godwin for London’s National Theatre, this equally original and offbeat take on the text raises laughs and showcases the talent of some of the last people you might expect to be adapting Shakespeare on the London West End.

On the foreign coast of Illyria, Viola (Tamara Lawrence) washes ashore after her ship is blown off course. She believes her twin brother on the ship, Sebastian (Daniel Ezra), has drowned. With no reason to return home she disguises herself as a young man and finds work as the servant of a lovestruck wealthy Duke (Oliver Chris), who is unreservedly in love with one of Illyria’s wealthy countesses, Lady Olivia (Phoebe Fox). This begins the whirlwind journey of Twelfth Night – a tale of mistaken identity, cross dressing and unrequited love.

Shakespeare was no stranger to addressing the major factors of the human condition; Twelfth Night is one of what is known as his ‘transvestite comedies’ that explore gender. It’s a very fitting and interesting choice to produce a new adaptation, given that the Western world is currently living through a gender revolution, even if certain aggravating church leaders whose names rhyme with Syle Lhelton would like to deny it. 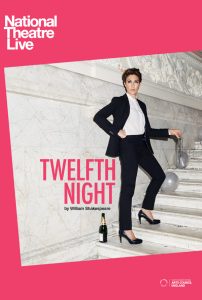 Simon Godwin has added yet another caveat to Twelfth Night’s gender swapping shenanigans. The character of Malvolio, a steward in the house of Lady Olivia, is now Malvolia and played by Tamsin Grieg from Black Books. This is one of the new additions that Godwin has stamped on this production, alongside contemporary music, settings and fashion (man buns and all!).

Tamsin Greig is a lot of fun. She’s undeniably funny in quite a few scenes but she is just doing the usual antics we’ve seen on Black Books. It’s a curious choice for an Olivier award winning actress, because she obviously has talent but when it comes to comedic roles it’s a talent for a single kind of performance.

The great revelation here is Phoebe Fox. She has an uncanny handle on the difficult yet supremely rewarding dialogue. She’s able to perform Shakesperian prose with feeling and even manages to sell it as natural; it’s an extraordinary talent which always deserves credit. If she isn’t soon swamped with lead roles then she sure deserves them.

This is a very fresh take on the source material, which is both a blessing and a curse. From one perspective it’s a shame to lose a lot of the period setting which made the play such an original, but from another, a play which has been showing continuously for about 420 years deserves to be adapted in original ways. Twelfth Night is still funny, and with its exploration of how one person can love another despite gender it’s strangely contemporary in that way that only the Bard can be.

Written By
Simon Storey
More from Simon Storey
Even if you’re not a fan of Formula 1, it’s very likely...
Read More