It’s always interesting to imagine how the current era of time will come to be defined. If the industrial/tech age ever loses its title appeal perhaps the age of equality would suit. Spearheaded by the suffragettes 100 years ago, social progress has leapt forward staggeringly in that time. And while it seems unlikely, but with a golden age that began 80 years ago and a dizzying cinematic revival with no end in sight, the age of comics could also be the name tag attached to recent history. And with one foot in each realm stands Wonder Woman.

With Warner Bros desperate to catch Disney in the financial race with no finish line, Wonder Woman is but one in a string of releases slated for the near future. This is worth mentioning because it hangs over the movie and unsurprisingly it ends the same as Batman v Superman with correspondence between Batfleck and Wonder Woman regarding teaming up soon.

The other cloud hanging over the the feminist icon of yester-century is that of man. Yes, us stinking no good rotten men have to leave our fingerprints all over the DC heroine. The first is of course producer Zach Snyder, whose action sequences director Patty Jenkins has drawn inspiration from. The otherwise well-choreographed fights all seem to require a small litany of slow motion sequences. 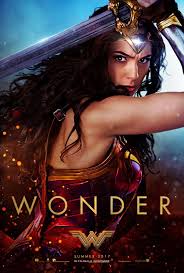 The second comes in the form of the four credited writers all of whom are male. Sole screen writer Allan Heinberg’s resume consists of writing for trash tv (The OC, Party of Five, etc.) which speaks for itself and this film. The last male influence is that of the cast, in particular Chris Pine‘s character, Steve Trevor. Fans who relish the damsel in distress inverse Steve brings will leave disappointed. In the film Steve serves as a guide, romantic interest and somewhat upstages Wonder Woman as the self-sacrificial hero of the film.

The feminist portion isn’t the only aspect dumbed down. From the outset the setting of the First World War seems an interesting one, yet little is done to capitalise on the abundance of interesting themes.  Instead we have a cartoonish representation of the war. Germans = bad guys. And Steve, the American spy, confoundingly answers to the British MI6. When this highly trained spy infiltrates German high command his cover is speaking English with a German accent.

The standout of the film is Gal Gadot who coasts with a lukewarm script. For the majority of the film she plays the foreigner in a foreign land archetype as Dianna Prince. This adds a few easy but genuinely comedic moments to the film. The idea of a moralised super hero within trench warfare, which comes in the middle of the movie, is the high point. Wonder Woman busting out of trenches and freeing towns in small scale battles is where she shines in this. In contrast, her final showdown later on in the film is laughably bad. “Now I know love can save the world!” Did Bono write this?

With the exception of few films (mostly just Logan) these superhero tales are inevitable showdowns with foregone conclusions. In of itself it isn’t a bad thing, and can be done successfully of course, but you can put Wonder Woman squarely in the popcorn for the brain category. If you’re expecting complex feminist narrative and a subtext subverting patriarchy, look elsewhere. If you want a charismatic kick ass femme, this is for you. On a scale of damsel in distress to Xena or Buffy, this Wonder Woman sits at a 6.

Wonder Woman is in cinemas from 1st June through Roadshow Films.