Released in the States last year and in contention for a Best Original screenplay at this year’s Oscars, it wouldn’t be a surprise if Mike Mills‘ latest outing, 20th Century Women, was overshadowed by the battle royale playing out all awards season between La La Land and Moonlight. But don’t discount it just yet; in any other year this charming period comedy would have been quite a formidable dark horse.

Starring an impressive ensemble of established and up-and-coming Hollywood heavyweights, 20th Century Women is the story of three women at various stages of their lives, living in 1979, free-loving-meets-punk California, doing their best to raise a teenage boy. Dorothea, a brilliantly realised hang-over of first wave feminism and 1960s idealism thanks to Annette Bening, is a free spirit restoring a dilapidated house, gathering misfits beneath her roof, and struggling to raise young son Jamie (Lucas Jade Zumman) into her vision of a ‘man’. She believes her son needs a positive male influence in his life, however her options in this field are William (Billy Crudup), the handy-man tenant helping her fix the house, and the tourists in her life who visit the house but don’t linger. Fearing she is no longer connecting with her son she enlists the help of tenant and resident artist Abbie (Greta Gerwig), and frequent visitor to the house and best friend of Jamie, Julie (Elle Fanning).

Through Jamie’s eyes and experiences we are drawn into the lives of these three vastly different women, and are invited to share their life experiences. His unique perspective and take on their various teachings makes for a charming and at times funny tale of growing up, growing old and growing apart. 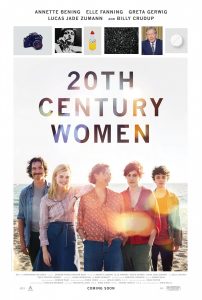 Greta Gerwig is a vibrant spark bringing to life the hopeful idealism of empowered women and the stark brutality and nihilism that encapsulated the heavier side of the California punk scene in the late ‘70s, driven by her passions and her tragedies. Elle Fanning once again falls into her seemingly typecast roles of a head-strong yet naïve young girl, struggling with sexual freedom and new wave psychology in the midst of the broken home epidemic. Billy Crudup seems to have brought Stillwater’s Russell Hammond into the next stage of his life; effortlessly inducing attraction in the opposite sex but still aimlessly floating through life spouting hippy clap-trap and taking signs from the universe as a means to navigate life.

But the stand-out performances by far are those of newcomer Zumman (who can be found portraying the infamous Gilbert in Netflix’s Anne With An E) and veteran Bening. The pair truly feel like a mother and son – in sync and affectionate, but drifting apart as the miscommunication common between parents and their children slowly frays their natural and practised rhythm.

It’s great to see the diverse and complicated stories of three women at the centre of a Hollywood film. Particularly in a world where man babies whinge on social media about theatres celebrating the release of original female badass Wonder Woman’s latest cinematic venture by hosting female only screenings. And other studios are too afraid to make female centred superhero films because they feel there is no market for the stories of empowered women. The one troubling aspect of this film, personally, was that the entry point of these stories were from the eyes of one of the only male characters in the film, a character who could, despite the film being titled 20th Century Women, be considered the films central lead character. This doesn’t detract from the impact of these three stories or how they will resonate with audiences, male and female, old and young alike. There are moments of genuine warmth and laugh-out-loud absurdity, however the film has enough gravity to remain grounded and true to its characters and central thesis.

20th Century Women is in cinemas from 1st June through Entertainment One.