There must be a “franchise blockbuster checklist” that gets ticked off whenever a new movie rolls off the big studio production line. Disney’s latest offering in the long line of “summer” movie sequels – Pirates of the Caribbean: Dead Men Tell No Tales – marks pretty much every box, but it still rolls along at a fine pace, and is much more fun than its bloated, convoluted predecessors.

Those boxes include: impressive set pieces, an over-elaborate mythology, flashbacks and call backs, forced connections between each character, actors CGI’d to look younger, celebrity cameos, daddy issues, passably funny ‘banter’, a character sacrificing themselves, a new generation taking over, a subplot for each of the numerous characters, and slapstick humour. That’s not to say that having each of these things automatically makes a movie bad, just less original, less surprising, more of a product. But Dead Men Tell No Tales is as close to the original Pirates as any of its sequels have got, and it’s easy to forget, under the weight of those earlier misfires, just how entertaining that first film was.

Dead Men Tell No Tales follows on from the events of the earlier films, with Henry (Brenton Thwaites) – the son of Will Turner (Orlando Bloom) – determined to break the curse that traps his father under the sea. As a teenager, he seeks out Jack Sparrow (Johnny Depp) to help him find Poseidon’s all-powerful trident. Along the way though, one of Jack’s nemeses, the ghost of pirate hunter Captain Salazar (Javier Bardem), is released from the Devil’s Triangle, and pursues Jack across the Caribbean. 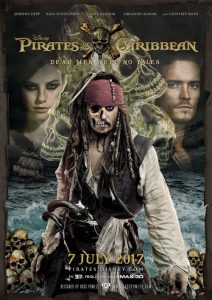 Depp gives the same performance that he’s given for the last fifteen (!) years as Jack, and there are points when the schtick becomes tiresome, particularly when he’s stumbling around drunk. There’s just no development at all in the character and, while he might entertain the kids, adults can expect the same as they’ve seen before. Bardem does his best with the limited Salazar, never quite reaching the same levels of menace and creepiness that made him such a memorable villain in No Country For Old Men and Skyfall. The special effects remain at the high levels of Bill Nighy’s Davy Jones though. Thwaites and Kaya Scodelario meanwhile, as the new generation of Bloom and Keira Knightley, feel like something of an upgrade on their predecessors.

Writer Jeff Nathanson (whose chequered filmography ranges from Speed 2: Cruise Control to Catch Me if You Can) manages to craft a plot that services the characters and storylines from the series without becoming too tangled, making it easy enough for a franchise novice to follow. The film moves at a swift pace from set piece to set piece, but unlike On Stranger Tides, which was an off-putting barrage of action, the film is given time to breath in between. There’s also an interesting flashback to the first encounter between Salazar and a young, pre-Captain Jack, but what it mostly did was have this reviewer long for a Master and Commander style spin off based around Bardem’s character.

Co-directors Joachim Rønning and Espen Sandberg were no doubt hired to bring the sense of thrilling, old-fashioned adventure that marked their ocean-based, Oscar-nominated Kon-Tiki, and here they’ve succeeded. While for the version watched for review, the 3D makes it hard to focus on objects and the night scenes much too dark, the action sequences are impressive. It might devolve into the CGI-overdose climax that’s present in most franchise affairs, but earlier there’s a bank robbery and guillotine swinging rescue that even Buster Keaton would have been proud of.

In replicating the success of the first film and mostly avoiding the mistakes of the sequels, Dead Men Tell No Tales is the best way to (steering straight into the metaphor) right the ship and sail off into the sunset.

Pirates of the Caribbean: Dead Men Tell No Tales is in cinemas from 25th May through Disney.

Written By
David Nagle
More from David Nagle
Last week we hoped that putting plot on hold would be something...
Read More