All-male private schools have never been a beacon for progressive attitudes, not least when it comes to issues of sexuality. It’s this stone-age mentality that makes it a perfect setting for Irish director John Butler’s semi-autobiographic film.

Handsome Devil begins with nerdy Ned (Fionn O’Shea) and new boy Conor (Nicholas Galitzine) paired together in a dorm room, an arrangement neither is particularly happy with. Through a mutual appreciation for music, however, the pair begin to forge an unlikely bond. It’s a relationship that doesn’t sit well with Conor’s rugby coach Pascal (Moe Dunford) or trademark bully Weasel (Ruairi O’Connor), both of whom suspect that not everybody on their team roster is playing on the same team.

Without giving too much away, sexuality is one of the film’s most prevalent themes, with Butler exploring themes of love through platonic, paternal and romantic contexts. Just as potent is the way in which Butler seeks to dissect and dismantle masculinity and demonstrate how sport can be as isolating as it communal, and as cruel as it can be euphoric. 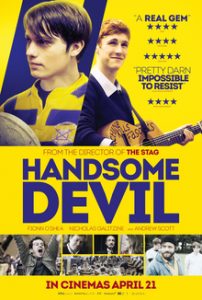 Disappointingly, this film – which laboriously tells us to look beyond stereotypes – gives us little more than shallow sketches of its dual leads. In needlessly rushing through the first quarter of the film, Butler denies us the freedom to make our own assessments of the pair. Too often we’re told things about Ned (he’s a nerdy outcast whose best friend is punk rock) and Conor (he’s a violent jock who lives and breathes rugby), without being given a chance to see these characters demonstrate who they actually are. As such, the reveal that these characters are more than just cookie-cutter moulds fails to come across as a surprise.

A contributing factor to these shallow first impressions is the decision to have Ned narrate sections of the film. Ned is heavy on exposition, but light on personality. Indeed, O’Shea’s character is unfortunately weak in more than just a physical sense. There’s nothing charming or neurotic or cute about his quirks – rather he’s irritating and judgemental, making it hard for him to earn our empathy. Similarly, Conor is only given rare moments to show he’s more than just a caricature.

For a film that’s largely cynical about sports, it’s also unusual that the play-by-play motions of rugby are given so much prominence, particularly in the film’s climactic final act. This finale arguably tilts the film’s balance closer to Remember the Titans than Brokeback Mountain, allowing the testosterone-fuelled emotions of its burly males to overtake the film’s otherwise poignant sentiments.

It’s a shame that the film falls apart at the editing stage, because wrapped up amid these questionable cuts is a decent film with some touching scenes. As a film primarily dominated by males and marketed towards a male audience, Handsome Devil should be applauded for holding a mirror to prejudicial attitudes. And it could have been a great film too, were it brave enough to hold a mirror to itself a few more times before hitting cinemas.

Handsome Devil is in cinemas from 25th May through Rialto Distribution.