Despite the success of Guy Ritchie’s Sherlock Holmes franchise (let’s be fair, he did manage to make more than one and there are rumours of a third), he doesn’t have the best luck when it comes to setting up a film franchise. RocknRolla ended with the very Schwarzenegger-esque “the gang’ll be back in RocknRolla 2”, The Man From U.N.C.L.E., which again, was seriously underrated and only slightly flawed, concluded with the forming of the team and the issuance of a new mission, and King Arthur: Legend of the Sword seems to be doomed to befall the same fate before it’s even been given a chance to breath: a set up for a film franchise that will never materialise.

Headlines have been screaming “Blockbuster Flop” and “Epic Fail” and “Why is this film doing so badly?” and I have to agree with that last one. The impression is that the film is terrible and movie-goers are therefore avoiding it like the plague. But despite my best efforts, stemming from reservations I’d had since my very first viewing of the trailer almost a year ago, I went into the film with very, very low expectations and was pleasantly surprised.

We all know the legend of King Arthur and his infamous pulling of Excalibur from the stone, and depending on which version of previous incarnations you’ve watched, or how detailed your year 8 SOSE teacher was (why were we learning this in History classes in Australia?) the surrounding details are familiar but varied. And certainly, as Glastonbury Tor stands monument to the “mythical” Camelot to this day, the Abbey in town claiming the final resting place of our hero (for real), for one reason or another the myth permeates itself again and again, open to interpretation, and malleable to the whims of the storyteller. 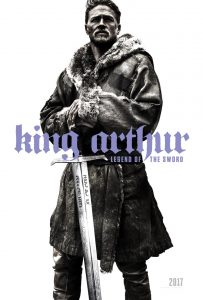 Guy Ritchie handles the source material with respect, but adds the typical slow motion mixed with fast jump cut action sequences and witty, gritty London repartee and quick wit he’s come to be known for. The old Shakespearean themes of sibling rivalry, jealousy and rising to the occasion are thrown in with a healthy does of ridiculous mythology (fantasy these days has to lift its game if it wants to compete on a scale with Game of Thrones; Ritchie seems to think giant elephants ought to do the trick). The film, despite its grandeur, never takes itself too seriously, and there are enough laughable moments to remind audiences that yes indeed, this is a film from the same director as Lock, Stock and Two Smoking Barrels.

He has assembled in this film a group of familiar faces such as everyone’s favourite to hate Westerosi Little Finger (Aiden Gillan) who is equally as slippery in this, but on the good side for a change, and right hand man to “pouty child” Marvel bad-guy Ronan, Djimon Hounsou. Jude Law seems to have carried over his ability to look dastardly whilst sitting in an important chair from his time playing The Young Pope. But the stand out performer is the titular Arthur, who is brought to life by action and adventure stalwart (and nice dude to look at with his shirt off) Charlie Hunnam as more of a London geezer than a blockbuster action hero. This grounds the film in a sort of Robin Hood leading his band of merry men sort of authenticity than the production values perhaps demand, but which is familiar to lovers of Ritchie’s earlier oeuvre.

The film doesn’t get bogged down in details and moves swiftly from one set piece to the next without feeling clunky, and despite the scale and length, never feels laboured (although there are far too many sequences of “powerful” men screaming into the ether). As a typical “Guy Ritchie’s England” take on a classic of English mythology, I just hope public reception won’t kill whatever he had planned for a sequel rising from the shadows of this enjoyable set piece.

King Arthur: Legend of the Sword is in cinemas from 18th May through Roadshow Films.

Written By
Kendal Coombs
More from Kendal Coombs
“What did corporate America do to piss people off so badly?” is...
Read More